I attended another CFI workshop session but on by the FAASTeam in the Reno area. This workshop covered two modules, the Sport Pilot rules and the process of submitting certificate online known as IACRA. 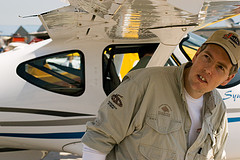 Both modules were good overviews of their subjects and we had some nice discussions among the attendees. There was a sparse turnout this night – probably because the weather here in Reno has finally turned good enough to fly. We’ve had a terrible Spring so far – lots of clouds, cold temperatures and wind. I believe  one of the ski hills is still in operation – now mid-June.

As usual, the really interesting part of the evening came at the conclusion of the formal presentation when the three DPE’s (Designated Pilot Examiner) in attendance told us about the ‘problem areas’ that they have seen on check rides since the last workshop. Eye-opening once again.

One area – not teaching students to handle anything other than a total engine failure. Huh? Yes, it’s nice to put some emphasis on what to do if the engine quits – establish that maximum glide, look for a landing site and then, if you have time, troubleshoot the problem. But what if that’s not the problem?

What if the examiner says “You have black smoke and orange flames coming out of the cowling.” Some, but not all, students remembered to turn off the fuel. But then the vast majority followed up with – establish that maximum glide, look for a landing site and then, if you have time, troubleshoot the problem. Sound familiar? Dude! Why are you not pointing the airplane directly at the ground and putting it anywhere on terra firma before the fire burns through the firewall – or an engine mount? Not even a hint from the examiner like “Gee, the floor seems to be getting hot” made a difference.

There are probably a dozen or so emergency procedures in the manufacturer-supplied operating manual. Your student should be intimately familiar with every one of them. Face it – it may be the only time they are and they need to know that those procedures exist and how they work.

While we’re on the topic of finding that landing spot – What happened to the concept of energy management? One of the DPE’s gave a student the engine failure virtually abeam a runway – at altitude – and the student missed the 6000′ runway completely.  After lots and lots of maneuvering he arrived over the numbers at 1000′. Another at a different airport did a little better – he missed a 4000′ runway.

Sounds like these students were being taught to the ROTE level – unable to analyze the situation, adapt procedures to existing conditions and make corrections to ensure a successful outcome.

The DPEs also had a few failures before they even got into the airplane – just on the preflight alone. They attributed it to the instructor telling the student to go out and get the preflight done, he, she would meet them at the plane in a few minutes.  The examiner asked the student random questions during the preflight about what they were looking at and why – simple enough, right?  Many could not identify what a particular antenna did. One thought the aileron counterweights were metal stiffeners. And another identified the nosewheel shimmy dampener as part of the hydraulic system that controlled the nosewheel brakes.

I really don’t understand all this. Did the instructors for these students just not care what they were teaching their students – or did they not even know the material themselves? Yes, students will usually be pretty nervous for their check ride but the examiner will  take that into account. These examples weren’t due to nerves – they were a lack of knowledge and ability.