Have you ever noticed how much easier it is to see mistakes when somebody else is making them? The last two legs I have flown on this trip have been with a captain who is an OE instructor. One flight was at the conclusion of a pilot’s training and the next, with a different student,  was the pilot’s first flight in the actual airplane. I was relegated to sitting in the cockpit jumpseat watching both pilots working on their flight routines.

Classroom ground training is designed to teach the aircraft systems. 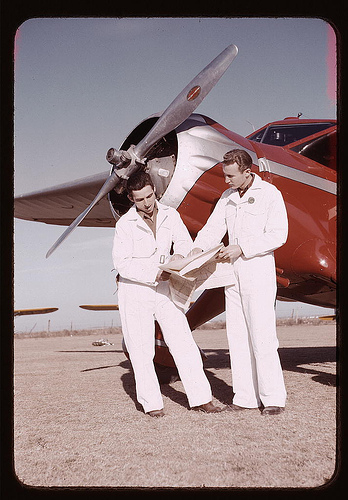 The training then concentrates on the operational checklists and their responses and then gets you up to speed on the flow patterns associated with the checklists. Airline operations treat the checklists as check-lists rather than do-lists. We work our way around the cockpit accomplishing items in a structured flow from one side of our work area to the other. When both pilots have finished their flow patterns, the captain calls for the appropriate checklist. The copilot reads the items on the list and the person responsible for the item then looks at the switch or gauge and responds with the actual position or quantity. Sometimes, in the case of items such as the oxygen masks which are duplicated on each side of the cockpit , both pilots are required to respond. So, in effect, each item is covered twice. Once during the flow pattern and again when it is visually and aurally checked and confirmed to be in the proper position. Once the checklists and flow patterns can be accomplished smoothly, the simulator training begins. This phase concentrates on the procedures required for normal and abnormal operations during flight. Usually you are given one simulator session to get used to flying with everything working, but after that it is rare that you take off without losing at least one engine or aircraft system of some sort. At the end of the simulator phase the pilot receives a couple of different evaluations which, if successfully accomplished, culminate in the awarding of a type certificate in the aircraft. Then the training moves to the operational environment. An OE instructor is assigned to the pilot and training is conducted on regularly scheduled passenger flights. On the last flight of OE training the pilot is administered a Line Check and, ideally, is released to the line to begin flying with regularly scheduled flight crews.

Watching someone accomplish his/her first flight in a new airplane brings back all sorts of fun and somewhat disturbing memories. I remember feeling like I was really behind the power curve but I can’t really remember when that feeling went away. After you have been operating in an aircraft seat for a few months, you develop a routine that you use to get all the things accomplished that you know need to be done before departure. For you, that is the best way to work, but that doesn’t mean that it is the best way for the next guy to work. There are an infinite number of ways to get from A to B, all of them safe. The hardest parts about being an instructor are letting the student find their own pace and realizing that your way isn’t the only safe way to accomplish the task at hand. I have seen instructors on both ends of the spectrum. One end finds an instructor who has no patience with a student and rather than let the student accomplish a task does it himself and then criticizes the lack of performance. The other end finds an instructor who just lets the student flail, assuming that eventually they will find their way. Those instructors you find in the middle are usually the most successful. They know to be patient, but they also know when to provide the ‘helpful hint’ that will steer the student in the right direction. The instructor I watched the past few days was one of the ‘helpful hint’ types. Very enjoyable to watch and easy to learn from.  It was also educational to watch the new pilot start developing his personal routine and pace.

The instructor and student are continuing their flights in a different direction from me. Based upon his performance on the first flight, I’m sure that he’ll do fine. Even though he was on his first flight, I managed to learn (or relearn) a few things by watching and listening. I hope I never lose that ability.