A Beautiful Weekend for Flying

I finally couldn’t take it any more this weekend. Clear blue skies, hardly any wind and temperatures pushing 70 deg . I headed out to the airport around  9 am  Saturday and was in the air by 11:30. The time between was spent visiting with/helping my friend in the hangar across the taxiway from me – and letting my engine pre-heater do it’s work. The temperature may have pushed 70, but the day started out closer to 30 deg. Such is life in the high desert. 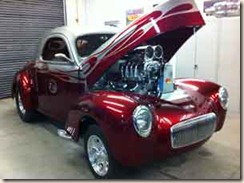 My friend, I have probably mentioned before, builds/rebuilds/works on Hot Rods. Here’s one he built that was back in the shop to get a water hose replaced.

I have probably had a photo of this one in an article before – this time it is sporting a different paint job – the metallic silver was added recently.

After talking with my friend for a while about his latest project I headed back to my hangar, completed the preflight and headed for the runway. There were plenty of planes out and about. I was in the run-up area with a Decathlon, a Diamond DA-40 and a Cherokee (with a student who was supposed  to solo that day). I finished my run-up and taxied onto the runway for take-off as an L-39 pulled up to the hold-short line.

It was lunch time so I decided to take the long way down to the Minden Airport (KMEV). They have a nice restaurant there that I have mentioned in the past (The Taildragger Café). The long way to Minden for me is to fly north from Stead to Pyramid Lake, then east to the next valley then south past Fallon, NV (N58) to Silver Springs (KSPZ). Then SE down the valley toward Carson City as far as Dayton Valley (A34) and from there to Minden. It’s a bit more fun than just going direct through the Reno-Tahoe Class C. The time from engine start to stop was right at an hour – plenty long enough to push oil around the inside of the engine.

Flying east while south of KMEV

Minden was busy as it usually is on any good weather day.  They have two main runways, 16-34 and 12-30. There is a very active glider operation on the field that was using runway 30 – two tow planes were operating, taking gliders up to about 1500’ and dropping them off for landing practice. Transient airplanes use runway 34 to stay out of their way. I took a wide  path around the east then south sides of the airport and then back north along the base of the mountains until I could turn in on a 45 deg entry to runway 34. I was number two of three on the downwind leg.

I parked in front of the café and as I walked in got out my phone and called a friend who lives south of the airport. He was available to visit and said he was on his way, so I spent the waiting time reading one of those CFI renewal lessons I need to finish this month.

We talked for about 3 hours – he has a shop on a dirt runway at his place (on Taildragger Lane).  Most of his work is accomplished rebuilding Swifts. He built up the plane I an now flying  – modifying it to the current configuration for the plane’s previous owner.  He is just finishing up another Swift – this one with a glass panel. As I remember, it has the two-panel Aspen display driven by dual Garmin 430s and an EI MVP-50 engine display. I believe it also has the Garmin transponder and audio panel. Yep, all it takes is a boatload of money… 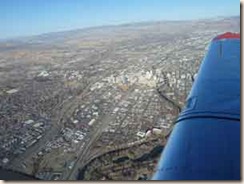 After a nice meal and some great conversation I headed back to Stead – direct this time, logging another 0.6 hours.  I took this shot as I passed downtown Reno on the way back. You can see I-80 going through the area just north of the city with the University of Nevada-Reno north of the Interstate.  The route that the Truckee River takes on the way to Pyramid Lake is also clearly visible. The clear line through the middle of the city is a railroad right-of-way.

The traffic in the pattern at Stead was using runway 08, so I crossed mid-field well above pattern altitude, flew north and descended for a 45 degree entry to the pattern. As it turned out I entered the pattern behind the Cherokee with the student pilot completing his third solo landing. Congratulations were in order.

I put the Swift back in the hangar, but I didn’t cover it up as I usually do. On Sunday I took the time to fly around some more – this time just a sightseeing trip around the area.  Logged another hour.  Another really nice day to be in the air – at least in this part of the country.

The good news is that it’s supposed to be back up in the mid 60s again by the weekend.

Once in a while it’s nice to take a break from whatever is going on in your own hangar and go visit some of the other hangars on the airport. It’s a good way to learn some new tricks and an easy way to spend some time talking airplanes and flying. I stop by the hangar across and down the row from me fairly often…..

END_OF_DOCUMENT_TOKEN_TO_BE_REPLACED

"There are two types of retractable-gear pilots, those who have landed gear up and those that will."