A Lot of People Out Flying

There were a lot of people out flying yesterday even though it was a weekday morning. I’m assuming it was because they had seen the same weather report that I had. 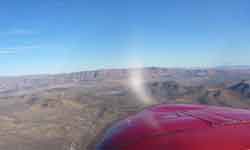 A major cold front is supposed to be moving through the area again, bringing more winds and much colder temperatures – and possibly a bit of snow. According to the latest METAR as I write this, the winds are arriving:

(The Reno-Stead Airport’s new digital AWOS system is now available online and through the popular aviation weather applications – we’ve made it to the ‘big time.’)

I guess we all figured that if we wanted to go flying we had better get it done yesterday. I elected to fly to my favorite breakfast destination. The first photo was taken on the return flight. 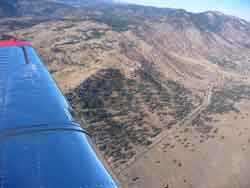 Shortly after the previous shot I turned a bit north and took this of a railroad passing through a grove of pine trees – Christmas trees in the wild. If you weren’t aware that the Swift had leading edge slots, you can see the left wing slot out there just short of the wingtip. They direct air flow over the ailerons at higher angles of attack giving you positive roll control at virtually all speeds. Just inboard of the landing light is a strap that goes around the wing. It is actually a removable cover for the gap between the inner and outer wing sections. Removable at the annual to inspect the wing attachment hardware and fuel and electrical lines running through the wing. 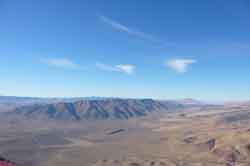 This is just another shot of our high desert area around Reno – taken just west of Pyramid Lake as I headed back to the airport. The previous photos were taken just past the second ridgeline  visible on the left side of this shot. The lighter v-shaped area is a glider port that I’ve mentioned in previous articles.

One plane was in the pattern using 08 and one was just about to cross over the field to enter downwind on 08. The contrarian had just taken off of 26 and was returning to land on 26. I took my time getting back to the airport  to see how things worked out. Lots of discussions on the radio. One plane gave up and left. The other two, operating on opposite runways managed to time things to not conflict and safely got on the ground.

At that point I got to a 3-mile 45 degree entry to downwind for runway 08 (the runway best aligned with the AWOS-reported winds) and made my radio call. Just as I made my call the runway 26-user called taxing to runway 26 again. I made another call as I turned onto downwind – then I finally heard the other plane make a call that he was taxiing to runway 08. At last.  I had wanted to fly a few patterns but I wasn’t going to stay in the air of this guy was going to go nose-to-nose with me.

I completed my first touch-and-go and was back on downwind when I heard the FBO call the other plane and ask if everything was all right. Apparently the plane had just come out of maintenance and the owner had left to take the plane back to his home base but made an immediate return. The reply that all was fine – the door had popped open on take-off and he landed to get it closed securely.

So now we have the full story. Could the pilot have handled things better? Probably. We could say that about all our flights. The winds were light, but favoring 08. When he taxied out there was only one plane in the pattern and going to runway 26 was more than a mile closer than 08. I’m sure he intended to take off  and depart the area without interfering with the other traffic. But the best made plans sometimes go astray. First the additional traffic flew into the area. By that time he had finished his run-up at the end of 26 and was pushing the power up for take-off.

How many times have you heard of someone losing control of the airplane because a door came open on take-off and the pilot attempted to close it? Way too many! The first rule in any emergency is to FLY THE AIRPLANE.  This pilot did that. It probably startled him and it was probably noisy, but it wasn’t particularly dangerous if he kept control of the aircraft.

In ‘normal’ circumstances he could have made a couple of turns and landed on 08, but that third plane was just about to cross over the field to enter downwind. Flying a normal pattern – though opposite traffic probably worked the best for him. He could have helped with situation by stating why he was returning to land, but he didn’t.

There could have been other un-communicated circumstances, too. When I saw him take off while I was on downwind I noticed that there were two planes making a formation take-off. The second plane never made a radio call nor did the lead plane specify that they were operating as a 2-plane formation. If the other plane had been on his wing for the first take-off it would have restricted his return options considerably.

The two planes made a straight-out departure and I never heard from them again. I finished my third pattern just as two more planes called that they were in the area and maneuvering to enter the pattern for 08. I stopped at the fuel island, filled up all my tanks and put the plane away for a few days. Maybe it’ll be nicer next week – and I can log some December flying time.

I have mentioned traffic pattern size in the past, generally in the context that some of the local pilots or instructors are flying patterns too far away from the runway. I often find it hard to locate pattern traffic when position reports are given because of the differences in pattern size. If I am flying on my downwind leg and another aircraft makes a downwind or base  position report I first look in a direction away from the runway – for a left downwind, the other traffic is usually to my right or right-forward if they are turning base because their downwind positioning is much wider than mine. Part of my close-in pattern choice is because of my old-school view that it would be nice to be able to hit the pavement if the engine quit and part of it is related to the glide ratio of my aircraft (see: crowbar).  When I encounter a difference of opinion on pattern size I choose one of two options.  I try to adjust my spacing with the other plane to allow me to fly my own pattern while they do their thing or I land and practice my patterns another day.  The one thing that I do not do is fly someone else’s traffic pattern. If you are going to make consistent landings you have to fly consistent traffic patterns.

An AvWeb newsletter arrived in my inbox recently that had at the bottom a link to a video made by Paul Bertorelli.   In the video he gives another view of  why shorter patterns are the better way to go.  He has the right color shoulder stripes, maybe I ought to give him a call…

I didn’t make this post because I have recently had some ‘issues’ with local flyers, I just thought I’d pass along the ideas put forth in Paul’s video.  Weather and timing have conspired to keep me out of my plane for almost a month and a half. It seems that when I’m out on a trip the weather here at home is beautiful. I’ve been home a week so far this time and the temperatures have been low and the winds howling – the commercial airport registered gusts to 55 mph yesterday. Today, April 5th,  we have 2″ of new snow in our back yard with temperatures in the 20’s F.  Welcome to Reno. The good news is that it’s supposed to be sunny and in the 50s the next three days so maybe, just maybe, I’ll get to go flying before I have to go back to work again.