Today turned out to be a great day for flying. I logged 1.5 hours just flying around the local area doing a little sightseeing. I had my camera with me and took a few photos that I’ll pass along for your entertainment. In case you’re interested, the camera is a Panasonic Lumix DMC-TZ5 (my wife just got the newer TZ7).

I flew around two of the local lakes and generally had a fun time. I had intended to spend some time in the pattern at Stead (KRTS) and practice some landings. When I entered the pattern there was one other plane flying a compatible airspeed, but by the time I had finished my first touch-and-go three other planes had entered the pattern, so I called it a day. The local weather guessers say tomorrow will be another nice day – the last of the week – so I might try it again tomorrow.

My first photo is of what is officially Anaho Island – better known as the Pyramid of Pyramid Lake. 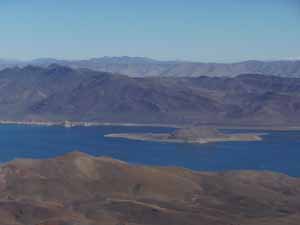 The water level is down quite a bit. In good years only the vertical portion of the island is visible. Pyramid Lake is unusual in that water only flows into the lake, none flows out. Lake water loss is only from evaporation. Pyramid Lake is entirely within the Pyramid Lake Indian Reservation and is home to world record sized Lohanton cutthroat trout. 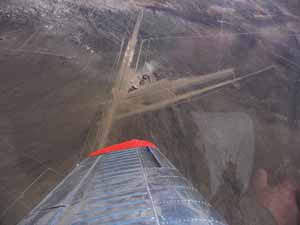 From there I wandered first to the west and then when well east of Stead turned north toward Truckee, CA. Just south of the Truckee airport, across yet another mountain ridge (a lot of those around here) is one of our more well known lakes – Lake Tahoe. 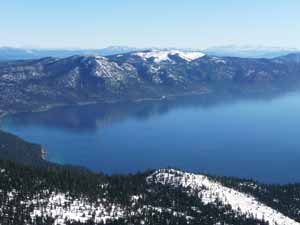 This is a view of the northeast corner of the lake. Incline Village, NV is at the left edge of the photo. I was flying at about 9500′ MSL. The lake surface is at about 6200′ MSL.

The next photo is looking southwest from about the same point as the previous shot. The low layer of clouds that covered the lake early in the morning has largely burned off -  the remnants are visible here reflected on the lake’s surface. The point of land sticking out is referred 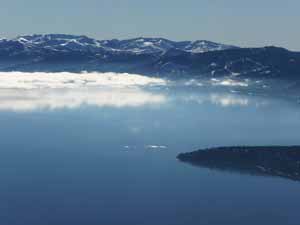 to as Stateline Point. The border between the states of Nevada and California runs down the center of the point and continues southward across the lake until abeam Zephyr Cove and then angles southeast to the town of South Lake Tahoe. If you drive along the highway that circles the lake you know when you have reached the state line by the proliferation of gambling casinos on the Nevada side of the border. 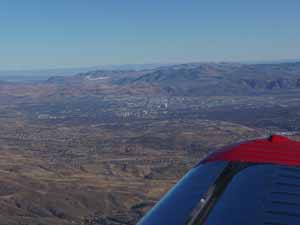 This last photo was taken as I headed back to the Stead Airport. Downtown Reno was clearly visible off my right wing as I flew by just outside the class C airspace.

It was a fun day of flying as evidenced by the number of planes in the local traffic pattern.  We don’t have many of these really nice and warm days ( 65 deg. F) at this time of year and  a whole lot of people seemed to believe that the airport traffic pattern would be a whole lot more fun than the holiday shopping traffic pattern at the mall.