Is There a Pilot On Board?

There have been a couple of incidents lately where a passenger with a pilot’s license has been pressed into service helping out in an airline cockpit, as in this instance. I have heard a few people comment that they sometimes thought/dreamed about what it would be like if they found themselves in that position. Most pilots probably have. Some looked forward to the challenge and some, given their level of flying experience, dreaded the thought of having the responsibility. Let’s see if we can’t give you a little ‘heads up’ on what would/should happen…

Of course, this is a euphemism and you shouldn’t actually try to wind the clock – for a couple of reasons. One, transport category cockpits now have electric clocks and second, you probably won’t be able to find the clock anyway.  What it really means is that the first thing you should do (in almost any emergency) is to take a few slow breaths and then analyze your situation. You are almost assured of having a qualified pilot in the other seat who will tell you what you need to know and what he or she will be asking you to do. For this discussion, however, let’s assume the worst and you find that you are up there by yourself.

Second – Identify the Things You Know.

The chances are really good that the plane is highly automated and is, at that time, flying under the control of that automation. Before you spend the 10 minutes trying to figure out how to adjust your seat (the one I sit in has 8 ways of adjustment), look and see what the airplane is doing or is being directed to do.

You probably have spent some time looking at the various cockpit layouts in Flight Simulator and you can easily Google your favorite aircraft instrument panel and see how it looks. Glass cockpit displays are relatively standardized so it should be relatively easy to pick out your current altitude, heading and airspeed/mach. Navigation may be a little harder to figure out, mainly because you might not be familiar with the navigation point names.  Most of the cockpits will have the autopilot controls on the glareshield, something like this: 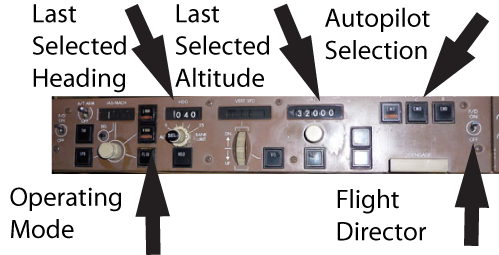 Everything on the panel is going to be labeled. A/P means autopilot, SEL means push or pull this to select it. A/T refers to the autothrottle system if the plane has one. Up is ON, down is OFF. If the button is lit, the system is engaged. LNAV and VNAV refer to Lateral (follow the course) and Vertical (hold the altitude) autopilot modes.