Before a pilot takes a plane into the air he/she is required to do a preflight inspection of the aircraft to make a determination of the aircraft’s fitness for flight. This is primarily a visual inspection, though some systems are operated if that operation would result in a better determination of airworthiness. Wing Flaps are usually extended so that a visual inspection of the operating mechanism is easier to accomplish. Landing and position lights and pitot tube heaters are turned on to make sure they are operating.  The aircraft manufacturer (of modern aircraft) will have provided a checklist of the items to be inspected and a suggested order for accomplishing the inspection. I won’t attempt to teach you how to do a preflight on an airplane since there are several very good sites already available for that. One text-based site using a C-172 is at weekendcfii.com.

Airline crews are also required to do a preflight inspection of both the interior and exterior of the aircraft. The crews are taught ‘flow patterns’ to accomplish the process in the most efficient manner. These flows are just a way to accomplish all the items on the inspection without referring to a written list. This is then followed up at the appropriate time with read and response checklists. The First Officer normally reads the checklist items while the aircraft is on the ground and each person affected by the item responds orally with the observed position of the appropriate switch.

The exterior inspection of the aircraft is accomplished by the First Officer, normally while the Captain loads the flight route into the onboard navigation system. The only items operationally checked on this exterior inspection are the aircraft position lights, which remain on all the time. The majority of the time when this inspection is accomplished there are at least a dozen people working on other parts of the plane. Refuelers are filling the fuel tanks with the required fuel load, mechanics and baggage handlers are moving loaders around the plane to lift and position cargo containers and baggage into the various compartments, fore and aft, and caterers are bringing their trucks up to the various aircraft doors to load whatever meals and drinks might be offered during the flight. Under the plane, servicing crews are servicing the aircraft lavatories and potable water is being added to the aircraft water tanks for coffee, drinking and lavatory sinks. Air conditioning hoses may or may not be plugged into the bottom of the plane to provide warm/cold air to precondition the passenger compartment temperature.

I took a couple of quick photos with my iPhone during a recent exterior preflight that show some of the things going on around the bottom of the plane. 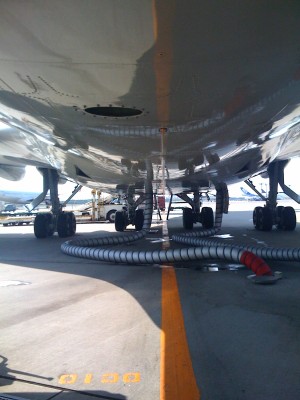 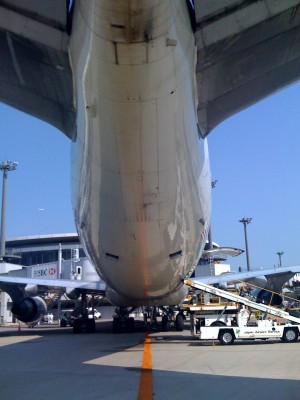