Still Here and Flying Around 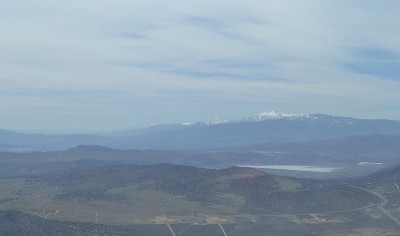 Looking Southward toward Reno from just NE of Stead (KRTS).

I know it’s been a while since I last posted. Wow, I just checked and didn’t realize it had been 2 months. Life happens.

According to Logbook Pro I have flown 4 times since then, including yesterday when this photo was taken. There is still snow on the top of Mt Rose but nothing anywhere else.

During the break in writing I have changed hosting providers so maybe you will notice quicker page load times than you were getting. The change will also give me more capabilities with my website development business – which pays for my flying habit.

During that 2-month period I also helped an EAA friend/flight instructor conduct a Private Pilot (PPL) test prep ground school. It was an interesting exercise in remembering all those things that the FAA considers important to new pilots. It had been years since I had even picked up an E-6B much less worked a wind problem with one. The same could also be said for the plotter and determining a Magnetic Heading to fly after drawing a line on a sectional chart and measuring the True Course. All the GPS units available and the online flight planning software has made us lazy – like losing your hand-flying skills if all you do is turn on the autopilot after takeoff.

There were 9 students in the class, of which 7 made it through to the end (7 weeks, two nights per week). It was a quick trip through the text and test-prep book (both ASA products).  In order to receive a course completion certificate which would enable the student to take the FAA written exam, the instructor set a requirement to pass one of the available practice tests with a score of at least 80.  The tests were available on the ASA website as a benefit of purchasing the course materials from ASA.  Unfortunately, only one of the seven who stayed through the entire course had taken any practice tests and met the instructor’s minimum score.

The instructor is starting a new session of the course next week and has invited all the students to attend again at no charge to get ready for the test. A nice gesture. The amount of material to be covered and the time allowed meant that if you ever got behind with the study assignment it was almost impossible to catch up – especially if you had a life outside of class. 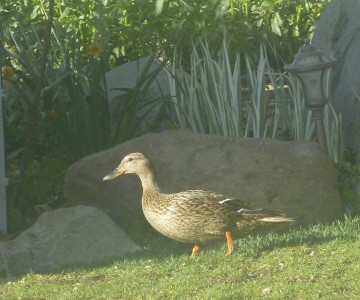 I saw this guy/gal land in the back yard the other day. Not something that you expect to see in a residential area of Reno – at 5000′ MSL.

Most of the lakes in the area are severely low. Washoe Lake, just a few miles south of us is almost completely evaporated. I imagine Mr/Ms Duck was looking for something green and our backyard appeared pretty inviting.

On tap next – this-coming Saturday is a pancake Breakfast – but since it’s only two hangars away from me I doubt I’ll fly to it. It will be a good reason to get out to the airport early. Then I can grab a plate and, hopefully, spend the rest of the day trying to finish the Spring polishing on the plane. I have the top of both wings and one side of the tail finished so far.  Have to look good for fly-in season, right?

I’m planning on making the AOPA regional fly-in again this year. This time it is a 2-hour flight to Salinas, CA (KSNS). It should be a fun time.