When you fly internationally and have layovers in foreign countries, you expect to encounter things that are not what you would expect to see or experience at home. Sometimes they are just little things, other times it is a major change. You learn to keep envelopes labeled with the various countries that you visit and place your leftover currency in them, to be used the next time you visit. Not everyone takes a credit card, believe it or not, and even if a business will take your home currency, the exchange rate will likely not be something you would not want to experience on a daily basis. You  quickly learn to look both directions before you set foot in any street. There is more than one country that drives on the ‘other’ side of the road. Rather than try to memorize it, play it safe and assume the worst. There are other little things that you might take for granted, too.

I am just finishing up a 3-day layover in south-central Japan. I just went out for a little walk looking for a light lunch and found myself walking up to an escalator as I would at home only to find that the ‘up’ side is on the left. It makes sense, knowing that the Japanese drive on the left side of the street, but it’s not something that you consciously think about.

We’re housed in a very nice hotel and this time, probably because of the extended layover, I have been given a nicer room than usual. It has a two-area main room with king bed and television on one end and a desk and sofa with coffee table and another television with DVD player on the other end. It has a nice big walk-in closet and a very nice marble-lined bathroom. And that is where I found my biggest surprise this trip. Shortly after I checked into my room I found it necessary to make a visit to the bathroom. I did my thing and then attempted to flush the toilet. Hmm. No handle anywhere in sight. I found a small panel with an illuminated indicator light on the side of the bowl, but it didn’t look like it did anything. Then I looked up at the wall beside the commode and just above the paper rolls.  This is what I found (click for a larger version). 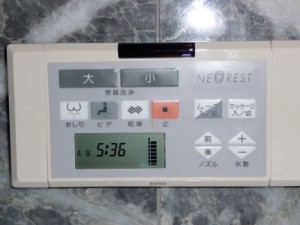 This all happened a couple of days ago and I thought it might be an interesting post to describe what was going through my mind as I sat there looking at this panel trying to figure out how it worked. There are no English instructions anywhere on the unit nor anywhere in the bathroom, though there are often accompanying English instructions on machines like ATMs. Yesterday morning I took a couple of photos of the unit for this post and started working on what I might write. Then this morning, while I was working out in the hotel gym, I was listening to podcasts that I had downloaded to my iPhone. One of them was a recent episode of TWiT (This Week in Tech) with Leo Laporte and, for this episode, Jason Calacanis (Episode 169). Right in the middle of the episode they had a discussion of exactly the same control panel. Calacanis had returned from Japan just prior to the recording. Jason was a bit braver than I, since he pressed one of those buttons in the second row with the ominous rear-end caricatures. He said a small arm motored out from under the rear of the unit and proceeded to produce a stream of water that almost reached the nearly 8-ft high bathroom ceiling. Only a Matrix-worthy maneuver kept him from getting soaked. I guess he had never seen bidet controls before. It was a pretty funny description, though.

My reasoning process figured that the most-used function would probably be the first button, so I closed the lid, stood back and pressed it. Success! Luck wins out over brains, yet again. I imagine one of the buttons activates the heated seat function that I’ve seen on other units, but it’s not that cold here yet and I haven’t been in an experimenting mood. I didn’t bring that many extra changes of clothes.