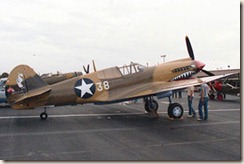 A Cub Couple
This is from AOPA Online. A married couple and flight school owners plan to fly their Piper Cub on an 8000nm journey around the United States this summer. The article has links to follow their progress.

The reason they are still flying.
This is from examiner.com. The Wings of Freedom tour flew their B-24 into Long Beach Airport recently. One of the passengers they picked up and flew to John Wayne Airport was 92-year-old Howard Mann. The last time he had been in a B-24 was the day his crew had to ditch in the Pacific after taking fire in a bombing raid over the Philippines in 1945.

What was lost is found.
This is from Yahoo News. A Polish oil company worker was exploring a remote region of the Western Desert in Egypt and came across a P-40. The article includes a 1:30 video clip of the find.

A very light Beech 18
This is from AOPA Online. The Grimes Manufacturing Company of Urbana, OH is a name well known to aircraft owners and builders. The people living near Grimes Field are familiar with it, too – for another reason…

It was another poor weather week to accomplish any fun flying.  I guess you could have made a few flights during the early morning hours, say before 10 am, but the winds were picking up earlier than usual. The gusts were to 40 mph yesterday.

I only ran across a couple of articles this week – both having to do with the Piper Cub.

Cub County Caper
This is from Vindy.com in Youngstown, OH. Gordon Murry, a journalism professor at Kent State University, and Ron Siwik, a retired radiologist, are flying two Piper Cubs around the state of Ohio this month. They plan on making a 9-day jaunt around Ohio to visit all 88 of it’s counties. They will accept donations during their stops and hope to collect enough money to establish a scholarship for a needy Ohio family to send a child to college. Their planned departure date is next Sunday, May 13th.

Feeling Old?
This is from News Chief in Winter Haven, FL. Jim Torphy has a 1946 Piper Cub. On April 23rd he took it up solo to celebrate his birthday – his 90th birthday.

Here are a few aviation stories that you may have missed this week.

Teenage Show-off
This one is from the Hannibal Courier-Post (MO). It seems that when Dillon Barron turned 16 he decided to do it by getting into the record books.

They start their aviation programs early in Texas.
This article is from Brownsville, TX. I thought this was just another article about a school aviation program – and it is. But then I noticed the age of the girl spotlighted in the article. She has already passed her PPL knowledge test once. Too bad it didn’t count…

I really can’t believe her reaction
This one is from the San Francisco Chronicle, but it happened just outside Chicago. The 75-year-old pilot hopped into her Piper Cub parked outside her house and went for a short flight, something she tried to do every day. This one didn’t end so well… Basic preflight planning would have helped. Since I added this link to my draft article earlier this week I have seen the article referenced in several other online publications – I doubt you could have missed it.

One way to spend your wedding anniversary
This article is from Eureka, CA. This couple has been flying together since they got married. For this anniversary they decided to try setting a record. Now they’re in the NAA record books.

Monroe, LA – Who Knew?
This one, obviously, is from Monroe, LA. The city is having an aviation celebration tomorrow (Sat, Aug 13th). The article lists the contributions that Monroe citizens have made to aviation in it’s description of the planned festivities. I had no idea…

This sounds like a fun adventure
An article from Port Townsend, WA. What better way to put your 1931 biplane to work than to fly it across the country to a fly-in. She could probably write a book about the adventure…

It’s getting harder to fly your model airplane in the SF Bay area.
This one is from the Contra Costa Times. Just like the bigger airports, radio-controlled aircraft fields are being shut down by the usual suspects – housing developments and environmental complaints.

A WWII veteran remembers
This article is from the Ft. Worth Star-Telegram. A 90-year-old veteran talks about his experiences flying a B-25 from Attu in the Aleutian Islands of Alaska.