I recently had the opportunity to fly with my next-door hangar neighbor. 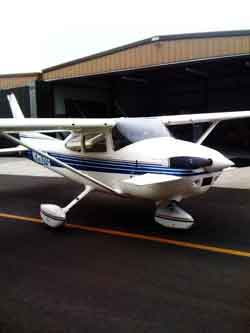 George has passed the age of 70 and although (or probably because) he has an extensive aviation background, he asked me to evaluate his flying performance and to set up a twice-yearly program to continue the evaluations.

George used to fly a Cessna 340, pressurized light twin, but the insurance costs and training requirements got to be too much of a burden. The insurance company was requiring a formal recurrent training course at Flight Safety twice per year. As a result, he sold his twin and bought a C-182Q. However he didn’t buy just any C-182, he bought a C-182 with a Peterson’s Performance Plus 260SE/STOL  conversion.  The modification includes the installation of a 260 HP Continental IO-470 engine and the addition of a canard just behind the propeller. The canard is not just a fixed surface, either. The aft third of the canard is a movable surface whose position is tied in to the elevator movement.

During the flight I had asked George how the aircraft handled and he recited a stall speed down around 35 knots and a cruise speed of 145 knots burning 15 gph. 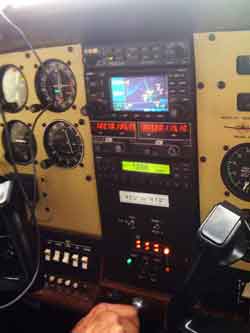 We didn’t explore the cruise speed  during the flight, but we did work down into the slow speed range and the numbers were accurate. After the flight he gave me a copy of Peterson’s brochure on the modification and a reprint of a 2001 Plane and Pilot Magazine article on the 260SE/STOL conversion. Both articles quote a flaps-down stall speed of 35 knots (flaps-up at 42 kts). Cruise speed at 6500 ft with 65% power is listed as 145 knots and both the take-off and landing distances are shown to be 390 ft. Very impressive performance.

The aircraft control movements felt almost the same as a normal C-182. It has been a while since I have flown one, but the elevator control seemed a little stiff. That made sense to me since the yolk  is operating a second set of control surfaces on the canard. George flew it well and “by the numbers.” He knew what power settings would result in which airspeeds at the different flap settings that we explored. He had no problems with simulated engine-out landings. He said that he chose this type aircraft specifically for it’s slow-speed flight characteristics. Up here in the Sierras we are surrounded by mountains and forests. If an engine quits you are, quite often, presented with few options for a landing that will not result in substantial aircraft damage. The slower that you meet the immovable object the better are your chances for coming out of the event with the ability to fly again another day.

For more information on the 260SE/STOL and Peterson’s other modifications you can visit their website at http://www.katmai-260se.com.