Lunch with Some Friends 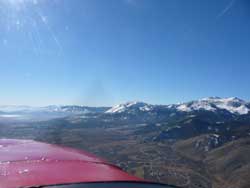 I try to fly my personal plane at least once each time I am home between airline trips. It keeps me current flying a taildragger and it keeps the aircraft’s engine parts lubricated . Besides,  it’s fun.

This past break I called a friend (Don) who lives south of Minden, NV (who also happens to be the IA who does my annual inspections) and asked him if he was up for lunch at the Minden airport cafe. He said he could take the time off and we agreed to meet at noon the next day.

We had been having a run of really nice days for the middle of winter in the mountains – light winds and temperatures in the high 40s – so it was a great day to go flying. I got to the airport plenty early, fired up the engine pre-heater and started my preflight inspection.  I finished that in short order (it’s not a very big plane) and still had more heating time to pass, so I wandered across the taxiway and visited with another friend who spends his days building hot rods.

By the time I was caught up with all he latest airport gossip it was time to head out for lunch. I pulled the plane out, locked the hangar, started up and headed for the runway. There has been construction underway on Stead’s most-often-used runway (8-26) for several months. It remains closed during the week and is opened on the weekends. In the next week or two the workers will have progressed enough to open it full time, but it will have a displaced threshold shortening the usable distance from 7600′ to 5000′.

I was soon airborne and climbing up to my cruise altitude of 7500′ (remember, the field elevation at Stead is 5050′). I decided to take the direct route and called Reno Approach to get clearance to pass through their Class C airspace. I was cleared south along the western side of the valley to stay at or above 6500′. They watched my progress until I was just west of the Carson City airport where they cut me loose to squawk VFR and proceed on course.

The Minden-Tahoe Airport (KMEV) is a fairly large uncontrolled airport that has two intersecting runways. The main runway is 16-34 and is used by most traffic. There is a large glider operation at Minden where several soaring records have been set. The tow planes usually use runway 12-30 but that runway crosses 16-34 at mid-field so you always have to be watching for crossing traffic both inbound and outbound. The gliders often do ridge soaring around the mountains to the west of the airport, so you also have to watch for crossing glider traffic while entering and flying the pattern.

In no time I was taxiing onto the ramp in front of the Taildragger Restaurant.  As I shut down the engine I saw another Swift friend (Gerry)taking a few photos of my plane. It turns out that he was in town to visit with Don and had arrived in time to have lunch with us. About twenty minutes later Don drove in from his shop south of Minden. Don had one of his clients with him, so we had a party of four for lunch. It was a nice visit with good friends. 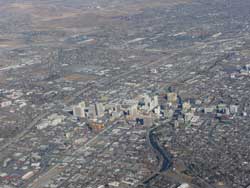 The flight home was just as nice as the flight to lunch. I took this as I passed the Reno downtown area heading north to Stead Airport. It’s easy to see the Truckee River winding through town on its way from Lake Tahoe to Pyramid Lake.

Not too long after that I was let loose to squawk VFR again. I changed to the Stead traffic advisory frequency and monitored the AWOS.  With runway 8-26 closed the most favorable runway was 14, so I overflew the airport 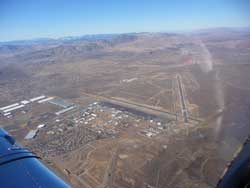 , descended to pattern altitude and maneuvered for a 45 degree entry to downwind. The landing went well, so I filled the tanks with 100LL, put the plane back in our hangar, and covered it up to keep the dust off while I flew my next airline trip.

It was a nice day of VFR fun flying.