Most of the time I spent at home between airline trips this month was spent polishing the top surfaces of my Swift. 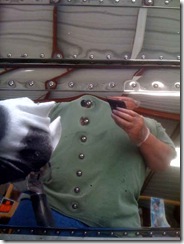 (Yes, I also polish the bottom.)  When I show pictures of the plane it usually generates questions about how long it takes to polish, who does it and what do they use.  The answer to the ‘who’ question is – me.  At one point my wife did some of the polishing, but now she has  much better things to do. I have always found it sort of relaxing. It’s not like the process takes a whole lot of brain power. As long as the weather is reasonable (70-90 degrees) and I can keep some air flowing to keep cool it’s not that bad a process. Messy, but not bad. Doing the top of the aircraft this time took me about four days of about 6 hours each. I use a cyclo polisher that has two dual-action polishing pads. Since the plane already has a well polished surface, I use a very fine polish (Nuvite grade S) and I use very soft polishing cloth. The cloth is un-dyed sweatshirt material cut into rectangular pieces. I buy all of my materials from a friend of mine in Northern California who has a website called PerfectPolish.com.  Tom has everything I need to get the job done as well as guides on how to use the products to obtain the best results.

I picked a pretty good time to do the polishing since the weather wouldn’t of allowed me to go flying. We had either clouds sitting on top of the mountains or winds gusting in the 30-knot range for the majority of the week. The day after I finished polishing the weather broke and I was able to take a friend over the mountains to a fly-in lunch meeting in Sacramento. I nice end to my time off.

Back at work I had another a 12-day jaunt around Asia. I carry a notebook computer when I go out on my airline trips – 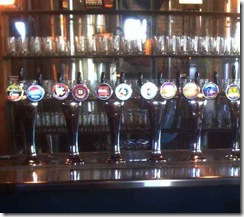 it’s an older 6-lb version that both gets me a little exercise lugging it around and keeps me from sitting in the bar on layovers to pass the time. It also keeps me in contact with the outside world. Some of the places where I lay over have little in the way of English television. Almost all have CNN and some have BBC, but often that is it for English ‘entertainment.’  However, as things often go, on the first layover of the long trip my computer started shutting down without warning every hour or so. That makes it very difficult to accomplish anything but it teaches you to save your work often.  The restart was then frustrating too since I would get all those ‘checking files since the program was shut down improperly’ messages. I tracked it down to a failed cooling fan. The computer was heating up, reaching it’s operating temperature limit and shutting down as a protective measure.

My first work-around for the problem was to place the computer over the room air conditioning outlet – one of those units you find under the window that makes the loud noises that keep you from sleeping. 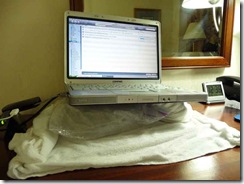 That worked for the first night. The next layover had ceiling AC outlets. Hmmm. My solution was to fill a couple of ziplock bags with ice and put the computer on top of them. Surprisingly (or not) that worked pretty well. It wasn’t too stable, but it allowed me to get some work done. (note: it’s best to use bags without holes in them.) One of my subsequent layovers allowed me to visit an electronics store where I was able to buy a reasonably-priced computer stand with two built-in cooling fans. That third method worked the best and was definitely less of a mess to clean up.

The things we do to stay on-line.