My How Time Flies

Another Happy New Year to you all. As you can see, I finally finished my website migration and theme update. I hope you find it a little easier to read. This time I automated the rotation of the aviation quotes and the random aircraft photos so you’ll see something new each time the page loads.

Way back last year I flew out a couple of times for fun and have been meaning to tell you about the good times. One flight was to the Minden-Tahoe Airport (KMEV). It’s a pretty short flight (41 NM) if you go direct from Stead (KRTS), but that requires transiting the Reno Class C.

They (NORCAL Approach – go figure) are usually pretty friendly and have no problems with the transition. The whole flight can be made west of their main runway centerlines. The occasion was a meeting for lunch that I had been trying to schedule with a fellow NWA retiree. Our schedules finally coincided with good weather up here in the mountains. Doug-1 (you’ll see the reason for the number in a minute) had just sold his C-150 taildragger and purchased a 180HP RV-6. That’s quite a step up in performance. I was really interested in seeing his new ride. When I had last talked to him he said that he thought another former NWA pilot might be interested in coming along, too. I assumed he was going to fly up with Doug-1, but it turns out that Doug-2 flew up in his own plane – a Wittman Tailwind. Doug-1 is based at the Auburn, CA airport (KAUN) and Doug-2 is based at Grass Valley (KGOO).

It was a really nice lunch meeting. We had all flown together on one type of airplane or another while we were with Northwest – so there were plenty of stories to go around. Funny, none of us regrets being retired. Doug-1 was the only one of us who had an option in the matter, though.  We vowed to have another ‘ old guys fly-in’ and to see if we can’t make it a regular thing.  I decided to take the ‘long’ way back to Stead  rather than traverse the Class C again.  I headed northeast out of Minden and flew up the next valley to the east of Reno until I got to Pyramid Lake and then turned toward Stead. It was a nice flight with light winds and I got a little more time on the plane.

A week or two later I woke up to another beautiful day in the mountains and decided it was time to go fly someplace for a late breakfast. 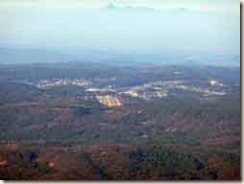 I hadn’t been to the Auburn airport for a while and I knew they had a nice restaurant on the field, so I pointed myself that way. It was a nice 40-minute flight, mostly downhill.

The field elevation of the Stead Airport is 5150′ and the Auburn airport is at 1531′, but Donner Pass is between the two airports. Going west I usually cross over the pass at 10,500′ and east at 9500′.  That day the winds were light again and there were only a couple of light bumps going over the pass.  On the way there you can see the Grass Valley Airport off in the distance to the north. You can also just make out the Sutter Buttes in the central valley of Northern California – a bit hazy in the valley that day.

This happened to be a Saturday morning, so when I got to the restaurant I found all but a couple of tables already occupied. I grabbed a small table along the wall and then watched two more planes taxi in. Good timing.

I had a nice omelet and read a back issue of Light Plane Maintenance that I had brought along. 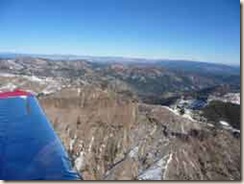 After a short stroll through the local Pilot Shop I headed back home  with a new t-shirt in hand to prove I made the trip. I flew back to Stead at 9500′. This first photo is out the left side of the plane, looking toward the north as I crossed Donner Pass. You can see that I’m just about at the tops of the mountains on the north side of the pass – though the pass itself is posted as being just a bit over 7000′.

This next photo is the view to the south-southeast in the same area. 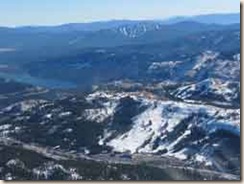 In the foreground you can see Interstate 80 which in this area runs between Reno and Sacramento. Just past the highway you can see the Boreal ski area at the Donner Pass summit. We just finished the driest December on record, so that is all man-made snow on the slopes.

The water on the left side is Donner Lake. Right on the edge of the photo above the lake you can see the edge of a brown area that is the location of the Truckee-Tahoe Airport (KTRK). Tthe ski area on the mountain in the background is the Northstar at Tahoe Resort ski area. Just over the ridge to the right of Northstar you may be able to make out a little of Lake Tahoe.

Great weather, beautiful flying, good friends and $200 omelets – what more could you ask?