I’m sure  that by now you have read all about the recovery of the flight recorders from the Air France A-330 crash in the Atlantic in June 2009.  There have been several articles about the information they are releasing from the data analyses.  Here is one from the Wall Street Journal that was published a couple of days ago. Here is one from today on the AvWeb site Most of the information from the latest AvWeb article comes from an update to the investigation published by the BEA (the French Aeronautic Agency doing the investigation). A pdf file of the BEA update is here and on the AvWeb site. 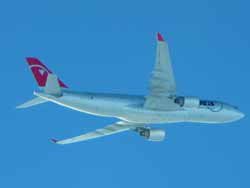 If you read the BEA report and are not familiar with the terminology – PNF refers to ‘Pilot Not Flying’ and PF refers to ‘Pilot Flying’ – a way the cockpit duties are assigned once the aircraft starts the take-off. Captains and co-pilots (First Officers) often trade off duties on consecutive legs of a trip. This time it was the co-pilot’s turn to fly.

If you read the report and have any questions about terms or phrases – leave me a comment and I’ll try to clear up the terminology for you.

Once again – I wasn’t there (obviously), I have no first-hand knowledge of what went on in the cockpit nor do I have access to the actual flight recorder data or cockpit tapes. Even so, I thought I’d make a couple of comments.

In the ‘Final Minutes’ graphic in the Wall Street Journal the note mentions the nose being ‘pushed up’ which confuses me a bit. It was obviously not written by a pilot if they are implying that control inputs were the cause if the increased pitch.

The Airbus A-330 is an ‘electric jet’ –  meaning it is controlled by computers. The controls in the cockpit are not physically connected to anything directly controlling the flight control surfaces nor the engine. Everything is done through position and force sensors. The computers controlling the airplane read the forces and positions from the pilot’s movements of the control stick and power levers. The computers  analyze that information and then decide if the control movements that they imply are within the ‘laws’ programmed within their software. If the computers think the request is ‘legal’ they will move the control surfaces and/or change the power setting to match the request.

In the computer operating mode referred to as ‘Normal Law’ there are extensive safeguards enabled – such as the inability of the pilot to input control movements that will allow the aircraft to stall or overspeed.

Increasing systems failures may degrade the operating mode from ‘Normal Law’ to ‘Alternate Law’ to ‘Direct Law.’ As those systems degrade, so do the protections built into the flight control system that control inputs cannot override. In Alternate Law there are still some protections in place, but they act in a different way – and pilot inputs can override the protections. In Direct Law there are no computer-generated protections in effect. There is then a direct relationship between the cockpit control movements and the flight control surfaces – though still through the computers.

The only time that the aircraft is intentionally operating in  a mode close to Direct Law is during the landing flare (a condition called ‘Landing Mode’) – that is so that the pilot has some semblance of normal feel and control feedback during the landing.

While the plane is cruising along at FL350 it is in Normal Law with all the aerodynamic protections of the system in operation.  If the computers, for whatever reason, were to think that the airplane is  flying too fast – up near it’s maximum mach number at that altitude –  they would take actions to protect the airplane. Those actions could include a reduction in power and/or a pitch up to reduce the speed. If the computers thought the plane was flying too slowly it could increase the power to maximum and try to lower the nose.

With the system degraded to Alternate Law and the autopilot and autothrottles disconnected it is up to the pilot to keep the plane upright. Hand flying a plane in the traffic pattern and hand flying the plane at FL350 are vastly different exercises. Then add to that the lack of tactile feedback from the side stick and you multiply the difficulty. The side sticks physically move very little compared to ‘normal’ aircraft control sticks and they have a centering spring that tends to return it to the neutral position.

The Airbus does not take lightly one pilot trying to help the other one with the controls. There is a light and warning visible on the glareshield when both pilots are making control inputs. You can’t tell what kind of inputs the other pilot is using, only that they have used some force on the stick to move it from it’s center position.  The two pilot’s inputs to the controls are added together and the result is sent to the computers. If both pilots pull the stick half way back the computer assumes that you want full back stick. If one of the pilots pulls full back and the other pushes full forward the sum is zero and the controls don’t move.

Now there are calls being made to change the airline training system to include more hands-on experience. It isn’t just the training system that needs to be changed. There also needs to be a change the jet transport philosophy of flying. When autoflight systems became more reliable and accurate the emphasis changed from hand flying the airplane to managing the autopilot.

I can remember going through training in the first versions of the 747 as a copilot and spending the majority of my simulator sessions hand flying the plane while also handling the radio communications with Air Traffic Control. The captain and flight engineer would be handling the malfunction and checklists. There was no requirement to use the autopilot and as I remember it was implicitly discouraged.

By the time I moved to the left seat of the smaller Airbus A-320, then to the right seats of the more automated B-747-400 and then the Airbus A-330, the emphasis had shifted completely. You were required to use the automation to the fullest extent. My impression was that the automation was so complex and capable that philosophy was that the more you used it the more familiar and comfortable you would be with its operation. But that familiarity comes with a price – the deterioration of hand flying skills.

I’ve stated my feelings about relying on automation in previous posts about being a systems operator rather than a pilot. And it seems that I’m not alone in my feelings based upon this opinion piece from a 747 pilot.

Was the lack of hand flying skills a factor in the Air France accident?  Maybe the final report from BEA will say.

I didn’t see this particular episode of  ‘The Early Show’ where ‘Sully’ Sullenberger was a guest, but this article on the CBS News site relates the opinions Captain Sullenberger expressed concerning the new information that has been released.

And here is an article from Jetwhine where Rob Mark gives his views on the newly released information.