I’m publishing a little late today – just got home from an 8-hour maintenance seminar. I like to attend the IA renewal seminars to hear what is going on even though I don’t hold an Inspection Authorization. Call it continuing education.

Here are some stories you may have missed this week: 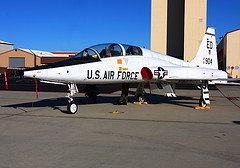 Another look at airline fees.
This article is from an Australian site. It lists some of the more obnoxious airline fees being charged now. The article is directed at Australian airlines, but relates them to other carriers too. I hope it doesn’t give the other airlines more ideas…

Experiences of one of the remaining WASPS.
This article is from a Salt Lake City paper. It relates some of the experiences of Nell Bright, now 89, who trained in Sweetwater,TX and flew B-25s during WWII.

A WASP almost turns Astronaut
This article is from Cleveland.com. It is a very short paragraph that describes just some of the life of Jean Hixon, first a WASP in WWI and then later selected as one of a handful of women to go through the Mercury Astronaut training program. Interesting comments to the article, too.

Northrop T-38 celebrates 50 years of service
This is from the official USAF website. I can still remember my first ride in the T-38. It sounded like I was sitting in front of a freight train. I was still trying to find the instruments that indicated whether or not the exhaust nozzles had opened when afterburner was selected and the instructor was raising the gear as we climbed out after takeoff. It was definitely a fun plane to fly.