I was minding my own business, very uncomfortably squashed under the instrument panel of my plane a couple of days ago when I heard in the distance the unmistakable sound of a Rolls-Royce engine coming to life.  Well, that’s not something that an airplane nut can ignore, so I carefully extricated myself from the floor of my plane and hurried outside to see what was going on.

John has a hanger in the row behind me. 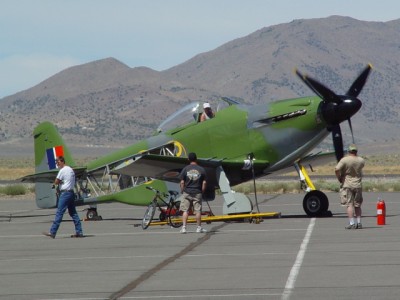 He is an ‘older’ man who spends almost all of his time building a replica of the Martin-Baker MB-5. Martin Baker is best known as a company that builds ejection seats, but the company originally started as an aircraft manufacturer. The MB-5 was one of their aircraft models that was never manufactured and the prototype was destroyed. John has taken it upon himself to educate the world about the Martin-Baker aircraft and has dedicated himself to building a replica of the MB-5.

You can see John in the cockpit during this engine run. In the first photo the camera stopped the props almost in exact alignment. The aircraft has a Rolls-Royce Griffon engine with contra-rotating props. You can see the fuselage structure aft of the cockpit with the metal panels removed. 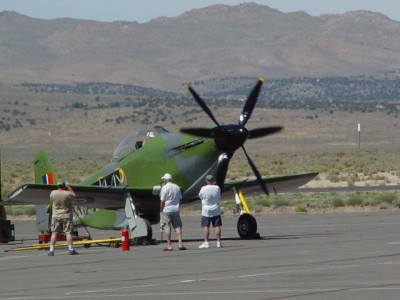 John is in his hanger every day working on the plane or another of his projects and has a crew of volunteers who help him. Today’s project and engine run was to determine if recent work had cured a vibration problem they have with the front prop. Unfortunately the vibration was still present and restricted the engine RPM to below 2000 RPM. So, work continues.  For a little more background you can read Wikipedia’s article on the Martin-Baker MB-5.

Stead Airport is continuing it’s transition to the site of the National Champioinship Air Races.  The temporary bleachers are almost completed with only the top two rows of seats remaining to be assembled on the last section on the east end. The semi-trailers of tents, seats, carpeting, etc. are starting to appear behind the grandstands. Next week the transformation will accelerate as vendor tents start popping up all over the airport. The large Air Race Banners were installed on the back side of the grandstand recently. 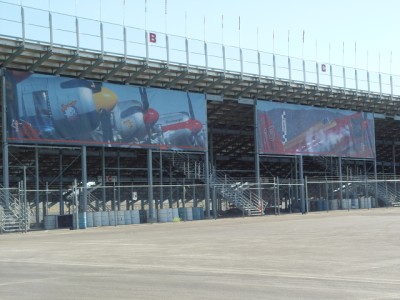 These have beautiful graphics of some of the race aircraft. It’s too bad that they can’t stay up all the time.  I’m out on an Orient trip again and will be gone from the airport for 7-8 days. By the time I return there will be only a week until the racers start arriving. They will be on site by September 6th with practice runs beginning the 7th and qualifying runs on the 8th, 9th and morning of the 10th with the first heat races the afternoon of the 10th, the official opening day of this year’s competition.

For those of you who may be interested, as I was driving out to the airport on the airport on August 22nd, I caught another glimpse of Rare Bear sitting outside of it’s hanger. 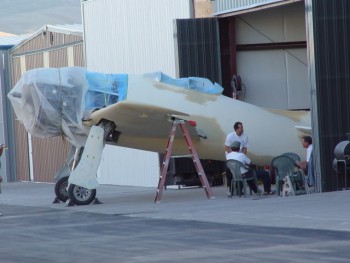 They’re making progress, but it’s slow. The hardest part of painting an aircraft, especially a quality paint job, is the prep work . Lots of sanding, priming, sanding and repriming to get the most defect-free surface possible before applying the finish colors.I’m sure that the finished product will be beautiful… and fast.