Flying Through the Night

Apparently the officials at the Narita, Japan airport want to make sure that after a 10+ hour flight across the Pacific we know where we have landed. The west side of 16R/34L has a really beautiful hedge of plants in the shape of the airport name with an operational clock on it’s southern end. 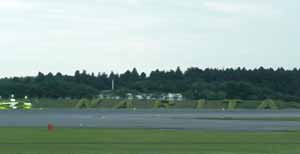 Things are nice and green over there now so I thought I’d get a good shot of it for you.

Half of the flights I make in my employment as an international airline pilot are completed at night.  That has it’s pluses and minuses.  The final leg of most of my trips is usually an all-night flight from Tokyo back to my U.S. base.  That last flight in June happened to coincide with a Lunar Eclipse. I had seen it mentioned by someone I follow on Twitter but had forgotten about it until someone on the overwater air-to-air frequency mentioned that the eclipse was starting. I was sitting in the right seat and a full moon was sitting right outside my window. I grabbed my camera and took a few shots as the eclipse progressed. I

combined them into a single photo showing the progression.  As you can see, it was a partial lunar eclipse. I took the photos at FL340 while we were flying between 170E and 170W at 49N.  Luckily there was no high cirrus cloud cover that night and the shots were fairly clear.

Unfortunately, turbulence was an ongoing problem in my 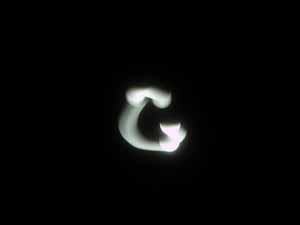 efforts to record the eclipse. I saved one of my more artistic attempts to take a photo while the plane was bouncing around. I quickly learned not to mess around with the shutter speed.  Maybe I could to license this shot to Google….