What do you do on a Layover?

Let’s see, you’ve just completed a 7 1/2 hour, all night flight from Tokyo to San Francisco.  How are you going to spend your time off before the next departure?

Why, go flying of course…

Before we left Japan I had been corresponding with @Captain_Ron on Twitter and had asked him if he was going to go flying that particular weekend. He said he was going to be working and wouldn’t have the chance. I then mentioned that I was going to have a San Francisco layover on Saturday. Ron has a job with flexible hours, so he rearranged his schedule and offered to pick me up at the SFO airport after I cleared customs. It took a bit of coordination and a couple of actual telephone calls (rather than text messages) but we managed to arrive at the same spot at the SFO airport. 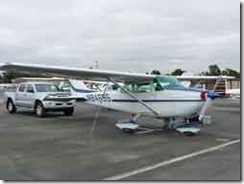 Palo Alto Airport (KPAO). After we exchanged a few pleasantries we headed off to KPAO.  Ron and I had only met once before – for lunch at the Sacramento Executive Airport (KSAC). That was the day that a group of us toured the aviation museum at the McClellan Airport.

Having just completed a Pacific crossing I wasn’t in any condition to fly, so I watched Ron preflight the plane and then strapped into the right seat. Ron completed a thorough pre-departure safety briefing and we confirmed that although I have a few more hours and ratings than he does, he would be the pilot-in-command and make all of the decisions concerning the flight.

Ron started the plane, listened to the ATIS broadcast , contacted ground and we were soon on our way to the end of the runway. 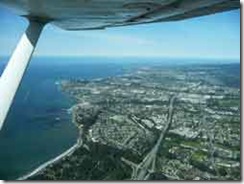 We took off to the north and made a big sweeping left turn to head south and toward a low pass that led  toward the coast and Santa Cruz, CA. When we got to the coast we turned left and followed it south to just past the Watsonville airport (KWVI). From there we turned inland and maneuvered to enter the traffic pattern for a full-stop landing. 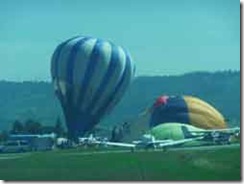 hot air balloons being deflated. It turns out that we had arrived on the day of an airport event for handicapped kids. There was a lot of activity on the ramp with groups of kids being shown aircraft on display in a large roped-off area. The local fire department was also taking part and had  tanker and ladder trucks on display. There were also several vendor tents set up on the grass area next to the aircraft parking ramp.

We made our way to Zuniga’s Mexican Restaurant adjacent 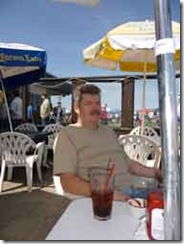 to the ramp at the airport and sat at one of their outdoor tables so that we could view all the days activities.  Ron was a very nice host and, though I tried to remain coherent  I probably didn’t do a very good job of holding up my end of the conversation. I hadn’t had much luck sleeping during my break on the flight to SFO. I always seem to choose the break time that has the most turbulence. The time went by fast and we were soon on our way back to the Palo Alto airport. As we flew back Ron pointed out the headquarters areas of both Apple and Google. Our route also took us just along the western edge of Moffett Field and the huge blimp hangars which are still there.

After a very nice landing,  a post-flight refilling of the Cessna’s fuel tanks and returning the aircraft to it’s tiedown space Ron drove me to my layover hotel and our quick visit was over. I had a great time in spite of my sleep-deprived state 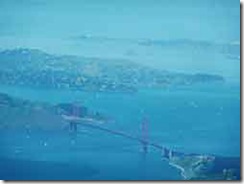 and really appreciate that Ron was willing to take time out of his schedule to spend a few hours with me. I think he really wanted to go flying anyway and I was a convenient excuse – as if as pilots we actually need an excuse to go flying.

I got a great night’s sleep that night and the next morning headed for the SFO airport with the rest of our crew. I was the relief pilot for that leg and was able to get this shot of the Golden Gate Bridge as we crossed the coastline on our way back to Tokyo.  This was one of my better layovers and one I would be more than willing to repeat at any time.