Yesterday I began my one trip for the month of March, a 13-day jaunt around Asia with a couple of round-trips back to the U.S. included in the mix. We started with a leg from Motor City to Nagoya, Japan. 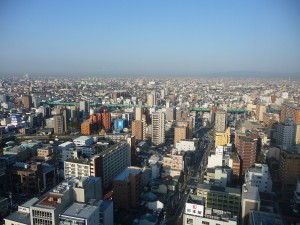 The crew for this leg was a little different than I have had lately, for a couple of reasons. This time we had two captains and two first officers on the crew, a change from the usual one captain and three first officers.  This is another of the on-going changes we are seeing as a result of our merger-in-progress. The concessionary contract we have been operating under as a result of our bankruptcy filing permitted augmentation with three first officers (all type rated in the aircraft), but the contract associated with our merged group reverts back to the more traditional long-haul augmentation of paired crews.This augmentation method will become more commonplace for us as the year progresses and will become the standard by the end of the year.

As the junior first officer on the crew, I was paired with the more junior of the captains (low three-digit seniority rather than two-digit) and was on the first break. With two crews in the cockpit, we can split the total flight time in half which resulted in a ‘break’ time of 6:35 for the flight. Since I wasn’t in the seat the first half, the exterior aircraft inspection was one of my duties during the preflight. It was a little cool, but an otherwise very nice day, so I enjoyed the walk and took longer than I usually take, pausing to watch the crowd of ground workers getting the plane serviced and loaded for the departure. We had a load of 404 passengers and enough baggage, cargo and fuel to put us within 700 lbs. of the maximum takeoff weight for our assigned runway. I was sitting in the jumpseat directly aft of the center console for the takeoff, so my job was to closely watch the engine instruments as the takeoff progressed and to announce any irregularities in the indications. If an emergency situation were to develop once we had passed V1 speed, the takeoff would be continued and we would climb to a safe altitude, retracting the landing gear and flaps. At that time the flying captain and I would run the appropriate checklists for the abnormal situation while the flying first officer would handle both the aircraft and the ATC communications. The non-flying captain would monitor the first officer’s flying  and would handle any company and/or cabin crew and passenger communications.  This provides us with the most efficient use of the four members of the crew and is our answer to crew resource management (CRM). The process is briefed before each departure including any specifics that the captain might want ( such as immediate fuel dumping in specific situations)  and ensures that we all know what we will be doing should something unusual occur. The runway that we were using was right at 12,000′ long and as we were about to lift off I looked out to the side to see the 3000′ remaining sign go flying by.  Since the aircraft weighed 826,000 lbs. at takeoff  a long takeoff roll was a given but losing sight of any runway in front of you as the nose is raised is still a bit disconcerting.

For a change, the first half of the flight was nice and smooth and I actually got some sleep during my break. It always seems that any turbulence forecast for the flight is supposed to occur during my time in the bunk.  Even though I lived in California for several years, I still find it hard to sleep with the bed rocking and rolling. Semi-refreshed, I slipped into the right seat just as Nome, AK was going by below us. I was given the option of working the radios or flying the plane, so I chose to fly, not being one to pass up the opportunity.

As the flight progressed, the captain and I got to know each other a little better. It turns out that we will be paired together for the entire 13-day trip. He and the other captain are good friends, having arrived at our airline through a previous merger. Both of them live in western Tennessee and both of them have their own airplanes. That meant that three of the four pilots on the crew also fly on their off-duty time. From my experience, this is an unusual occurrence among airline crews.

The more senior of the two captains has as his off-duty ride an Aerostar, a very nice, fast twin designed initially by Ted Smith and later built by Piper Aircraft.  A very nice ride.

The captain I am paired with leans, as I do, toward the smaller sport aircraft. He and his son, who is away at college, have a 7ECA  Citabria and a Cessna C-150M. However, he also enjoys playing golf and wants an aircraft that will hold both he and his wife, some baggage, a couple of sets of golf clubs and that will take them at a reasonable speed to golf outings in the eastern U.S. Whenever you talk about taking two people and baggage to locations even a moderate distance from home, you are looking at, as a minimum,  a 4-place airplane. He looked at various options, did some studying and settled on building a Van’s RV-10 to solve his transportation problems. So far he has completed most of the tail surface work and is having a great time. He’s involved with his local EAA Chapter, has an EAA Technical Counselor looking over his work and has an A&P mechanic helping him along the way. I have no doubt that the project will be completed and the finished aircraft will be all that he expects it to be.

We arrived in Nagoya a little after sundown to find clear skies and light winds. The ATC vectors to the airport were well planned and put us on a 10-mile final for the ILS to runway 36. The approach and landing would have been a non-event if ATC  hadn’t squeezed a B737  onto a short final in front of us. It meant that we had to configure and slow to final approach speed quite a bit earlier than normal in order maintain or increase the separation between the planes. As we continued the approach we reviewed the procedural steps for a go-around , the route we would  follow and the altitude to which we would climb but it turned out to be unnecessary. We received our clearance to land as we passed through 500′ AGL and the other aircraft began to clear the runway.

Our next leg will take us to Manila tonight, about a 4-hour flight south from here. As usual, the weather forecast shows scattered thunderstorms with a daily temperature right at 90 °F and a humidity that just about requires a snorkel for breathing.  Luckily our hotel has a good air conditioning system. Chances are really good that I won’t need my leather jacket while I’m there, but I’ll probably have to break out my umbrella.