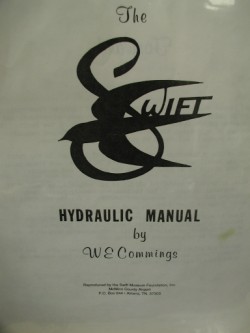 The main landing gear downlock is the simplest of the hydraulic mechanisms on the Swift to rebuild, but it still is best accomplished with a copy of the Swift Hydraulic Manual. It may be purchased from the International Swift Association, Athens, TN.  In it are parts breakdowns and step-by-step instructions for the overhaul of all of the Globe Swift hydraulic components. The Swift Association also has a Parts Store which sells pre-packaged seal kits for the various hydraulic components.  I have listed for your reference the kits that I purchased when I began my hydraulic rebuild project, but check with the Parts Store representative when you make your order.