Sorry Folks. It was pointed out that this article link was not working.  The DeKalb Chronicle is operated by Shaw Newspaper Media. Shaw doesn’t appear to want anybody out of their area visiting their site, so  once an article has been available for a few days they move it to their Archives located behind a firewall. Heaven forbid that someone should bring them traffic by linking to one of their articles. 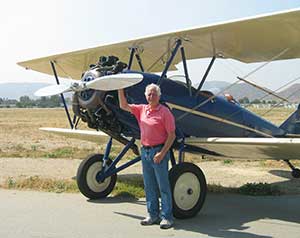 Bruce McElhoe and his 1929 travel Air 4D, one of the participants in the 2012 American Barnstormers Tour

This is from the DeKalb, IL Daily Chronicle. Morgan is David’s teenage daughter. Thanks to a nice offer at a local Corn Fest last year they now have a common ground to discuss over dinner. Not a typical situation with a teenager…

The Spirit of St Louis
This is from the Golden Gazette News – Golden Age of Fiction News from Yesterday and Today. From their FAQ page: The Golden Gazette News features stories, articles and interesting facts from the pulp fiction of the 1930s and 1940s written by New York Times bestselling author L. Ron Hubbard. Looks like there are several interesting articles on the site.

2012 American Barnstormers Tour
This is from the Brainerd (MN) Dispatch. The 2012 American Barnstormers Tour kicked off last weekend and will run through the remainder of the summer. This article talks a little about the pilots and their airplanes. The tour’s website is AmericanBarnstormersTour.com where you can find their planned stops and the dates – it’s well worth the time to pay them a visit if you are near one of the stops.

No flying for me this week, but I did spend a little time at a couple of the venues for Reno’s Hot August Nights event.  Here are some photos I took – in no particular order. Not the all-chrome super-customized hot rods, but some nice restorations of older cars and some that you probably don’t see every day.