I mentioned in a post a few weeks ago that training on a new aircraft was in my future.  The future is now. I am about to enter my third week of Initial Qualification training for the Airbus A-330.  The decision to switch aircraft was not an easy one to make. I really enjoyed flying the Boeing 747-400.

It is a very comfortable, capable aircraft (even if the cockpit is a bit noisy). However, quality of life is a big factor in a professional pilot’s decision making, especially these days when it is one of the few benefits left to the job. So rather than sit on call and keep flying the Boeing I chose to move to the Airbus where I will be senior enough to bid a schedule each month.

So,  what is involved with learning a new aircraft in the airline world? Believe it or not, the process is pretty much the same as it is in the light aircraft world. First you learn how the airplane works, then you learn how to do the things it takes to make the airplane useful, then you practice the things that you will  do if something fails mechanically.  Obviously, the bigger and more complex the aircraft the more intense the training will be, especially when there is a time limit to the learning process.

The first 6 days of our training  involved classroom instruction in the mechanical systems of the aircraft.  Since the Airbus is an “electric airplane” that is controlled by something over 75 different computers, the systems course is loaded with new acronyms. (My guess is that if you loaded all of the Airbus acronyms in the aft cargo compartment, the plane would rock back onto it’s tail. ) 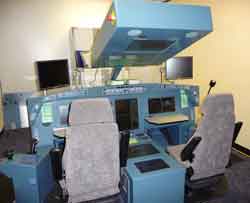 During this phase we were also introduced to a fixed-base trainer similar to those you see for light planes. It was used during the systems training to reinforce the lecture information by allowing us to move switches and see their effects on the aircraft operation as well as the indications and effects of partial or complete failure of a particular system

At the end of the systems phase of training our knowledge level was evaluated through a closed-book, timed 100-question computer-generated test. The aircraft’s systems were broken down into ten groups, such as landing gear and brakes, or air conditioning and pressurization and each group was coved by 10 questions. A passing score on the test required 80% correct answers overall and in each individual section.

After successfully passing the systems portion of the training we progressed to the Procedures Phase of the training. This phase covers preflight procedures,  programming of the Flight Management System (FMS), checklist operations, flow patterns that pre-position switches bef0re the checklists are run and in-flight procedures for normal and abnormal aircraft operations – precision and non-precision instrument approaches, FMS flight plan modifications, airway intercepts, etc. Each day another set of operations is covered in a classroom lecture, then practiced on a simulation program using desktop computers, then practiced again during a 4-hour session in the fixed base simulator.

Everyone in the class had the same work load during the systems phase. We all received the same instruction and were required to take a similar test. However, the procedures phase is geared toward the seat that the pilot will occupy. That’s good news and bad news for me. At the end of this course I will be issued a full type certificate, the same as the captain. My final check ride will be taken in the left seat. However, I will also have to demonstrate proficiency in the performance of all of the duties for the right seat. It’s an added workload, but the reward is the type rating. It’s a challenge, but gladly accepted.

Back to the books.