An argument for the use of business aircraft: short-haul airline flying declines.
This is a Dallas News article citing the decline in airline short-haul flying – even by the leader in that type of operation, Southwest Airlines. This seems to me to be another excellent argument for the use of aircraft in business operations and possibly an opening for small charter (Part 125) operators.

A young girl set her sights on flying and has never looked away.
This is a feel-good article about a young woman, now 20 years old, who set a goal of flying when she took her first flight when she was 11.

A museum in Ft. Worth, Texas begins its year-long celebration of aviation.
A Ft. Worth newspaper article recounting some of the aviation history of the region and lists the aviation events throughout 2011 that will commemorate the 1911 Great Aviation Meet.

Good News/Bad News for active duty military and veterans
President Obama signed into law the new GI bill last week that will give active duty and retired military personnel the ability to take flight training. The bad news is that the bill will not go into effect until October 2011 and only then if Congress finds a way to fund the additional costs.

Someone needs to go interview this man and get his story recorded.
This individual lives in Virginia and flies a Comanche out of New London Airport(W90) in Forest, VA. His father flew Jenny’s in WWI, his brother flew A-26s in WWII and he flew 191 combat missions in Vietnam. He has been collecting aviation memorabilia for as long as he can remember. There have to be some great stories tucked away in his memory.

FCC decides to drop it’s effort to ban 121.5 ELTs
This is an AOPA article on the latest from the FCC concerning their desire to totally ban 121.5 ELTs. It’s good news for aircraft owners who don’t want to pay out the rather large amount of money necessary to purchase one of the new 406 units. However, it will probably slow the development of the new units and their resultant cost reduction. Remember that the satellites are no longer monitoring the 121.5 frequency, so take it upon yourselves to check the frequency once in a while and report any beacons that you hear.

We Need to Watch Out for Ourselves

It seems that these days we keep paying more and more to our government and in return we receive less and less.  Air traffic control centers are being consolidated and still controllers are in short supply with training going on constantly in most facilities. Flight Service stations are now operated by a government contractor and are also being consolidated into as few facilities as possible to get the job done.

Most of us probably are still waiting for the new 406 MHz ELTs to come down in price while still using the cheaper 121.5/243.0 ELTs in our aircraft. We know that the satellites no longer monitor the lower frequencies but we figure that if we get flight following or possibly file a VFR flight plan we are covered in the case of an emergency landing.

Maybe we’re not watched as much as we think.  We all can remember the crash of  Steve Fossett in 2007 and the search effort  that failed to find his aircraft a mere 90  miles from his departure point.  He was not using flight following nor had he filed a flight plan, but family members and friends knew generally where he was planning to go. Would either of those steps helped the search effort?  The following article was published in a recent AvWeb newsletter:

The FAA needs to do a better job coordinating its search and rescue responsibilities, the NTSB said recently, to ensure that survivors of aviation accidents get help as quickly as possible. "The whole process needs to get nailed down a lot tighter than it is," NTSB radar expert Scott Dunham told the Associated Press. In a [Jan 2010]  letter to FAA Administrator Randy Babbitt, the safety board cited several cases when information readily available to FAA staffers was not communicated to the Air Force Rescue Coordination Center as quickly or as clearly as it should have been. In one of several cases cited by the NTSB, a 2007 accident in Georgia, the pilot survived the crash of his Piper Tomahawk and activated an emergency transponder code. Due to miscommunications between the FAA and AFRCC, no search was launched until after the pilot’s family reported him missing the following day. When the wreck was found, the pilot was dead. Four other cases cited, from 2006 to 2008, all involved general aviation aircraft.

Today’s AvWeb newsletter also had an article on ELT search capabilities and a new capability under development by NASA. The article said, in part:

…The Search and Rescue Mission Office at NASA’s Goddard Space Flight Center in Greenbelt, Md., has developed a satellite-based system that will be able to almost instantaneously detect and locate distress signals generated by 406 MHz beacons installed on aircraft. NASA said this week it is now testing the system and it will begin the transition to it in 2015. Under the current system, ELT signals are received by weather satellites, but the new system will be incorporated into two dozen GPS satellites, which fly in higher orbits. "With a mid-Earth orbit search-and-rescue capability provided by GPS, one emergency signal goes off, and six satellites will be in view," said Mickey Fitzmaurice, space systems engineer for NASA. "Almost instantly, I can begin processing the signal to determine its precise location. Right now, it can take an hour or more before we can even act on a signal."

This sounds like a vast improvement over the current system but its implementation is still several years in the future. It seems to me that the prudent thing to do now as a general aviation pilot would be to make sure that you have established your own flight following program. Some people have elected to purchase and use PLBs – Personal Locator Beacons that use the same monitoring system as the aircraft ELTs. Some have integral GPS receivers and transmit position coordinates when activated. Most seem to have a 5-year battery replacement cycle and are restricted to about 5 test uses during that battery life period to confirm that the unit is working.  A quick price check of PLBs found a range between $280 and $650. Here is an example of how the PLB system works – from an individual who had to activate his PLB when his hiking partner broke his leg while on a climbing expedition.

The way the PLB system works is it sends a signal to satellites that circle overhead every 45 minutes. The PLB is registered at NOAA with my name, emergency contact number, address, etc. When NOAA received the signal, an Air Force SAR coordinator called my wife, who told them where we were and that it was unlikely that I’d accidentally triggered the device. The second satellite pass—45 minutes later—confirmed that the PLB was still on and they rolled the helicopter out then from China Lake Naval Air Station. The Inyo County Search and Rescue team coordinated and was in contact with my wife. I felt bad that she had to get that call but she was able to give them detailed info our climbing route.

But one lesson learned is that the PLB isn’t that precise and you need some way to signal rescuers. They had difficulty spotting us until they saw my red parka. The traditional signal mirror doesn’t help much in a snowstorm.. I was thinking about getting my LED headlamp but wasn’t sure if it was bright enough. Eventually, jumping up and down in a red parka and waving my arms worked to get their attention.

I have elected to go a different route and use the SPOT Messenger rather than a PLB. The SPOT unit uses the company’s own global satellite network which covers most of the world’s surface. When the unit is activated it transmits tracking information to the company’s web site at approximately 10-minute intervals. A separate message function can send emails to as many as 10 addresses to announce that you are all right – or can be used to indicate that the trip has begun or ended successfully. The unit also has an SOS/911 feature that sends a distress signal that is received at the company’s emergency center in Houston, TX. At the same time the emergency function sends the emergency message to email addresses on a separate notification list that you have set up.

I came across this spot track today. It shows a flight that a friend of mine took  on his way back to Washington after the National Swift Fly-in in Tennessee. It gives a much better idea of the ability of the Spot Messenger than my short trip shown below. His flight started at Bozeman, MT and progressed westward from there. 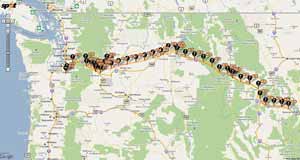 This is a sample of my tracking site on a recent flight I made from Reno-Stead, NV (KRTS)  to Quincy, CA(2O1) for breakfast. 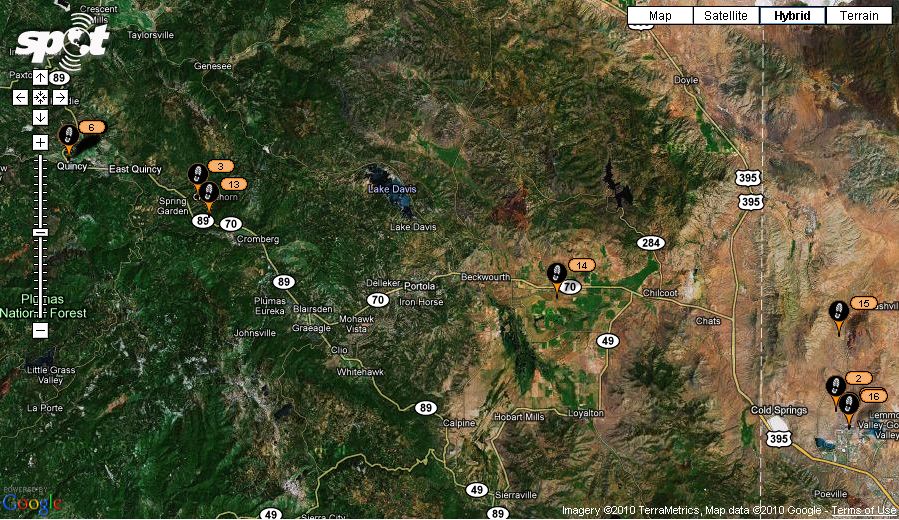 There were 16 position flags recorded for the flight. I activated the unit when I entered the run-up area at the end of the runway before I took off.  The #16 flag covers that first position since the last position happened to overlap it when I was in the landing pattern.  The #2 flag was recorded as I left the pattern after take-off.  The physical distance between position flags is directly related to the groundspeed of your aircraft. You can see that the #3 flag is most of the way to Quincy. I left the Spot unit activated while the aircraft sat on the ramp in Quincy as indicated by the stack of flags in one location. Then flags #13 – #15 show a different route was taken on the return flight. Zooming in on the map on the SPOT website can get a closer view of multiple flags in close proximity.

When you purchase your SPOT account you set up your individual unit with the email addresses that you want notified. In addition to the main account access you can also set up map access for specific individuals with their own password so that friends or family members can have access to your route progress.

The SPOT and PLB units operate in very different ways. The PLB is a one-time purchase that is designed to be used only in the event of an emergency. The SPOT unit has a lower initial price, but has associated with it a subscription cost for the monitoring and tracking service that runs about $160/year. It is designed to be activated whenever you are flying and will track your progress as you go.

The newest model, the SPOT 2 Satellite Messenger units range in price from $120 to $170. They are available in most sports stores or through Amazon (Affiliate Links below)