No flying this week – I went out to the airport Saturday to see how it looked, but didn’t like the smoke hanging in the air. There was (still is) a fire-fighting TFT up within 4 miles of my intended destination (2O1) and the prevailing light breeze was blowing the smoke from the fire toward Reno and the surrounding valleys.

We’re getting into the hot part of our year now – probably one reason they call the celebration this coming week Hot August Nights. I’m looking forward to taking a look at some of the custom cars that will be in town, but not looking forward to the heat. Starting Wednesday it’s supposed to top 100 degrees every day. Makes for pretty high density altitudes when ground level is a bit above 5000’.

A couple of weeks ago I decided to experience the Colusa (CA) Old time Fly-in. I had heard that it is a nice quiet affair. Hmmm. Not this year.  As I crested Donner Pass on the way to the fly-in I started hearing aircraft in the Colusa traffic pattern (same frequency as Reno-Stead).  The chatter continued until I turned the radio off at engine shutdown.

Apparently this was the year everybody in the area decided to attend the fly-in. the ramp was full of airplanes, the taxiways between the hangar rows were filled with airplanes and there was a row of planes in the dirt all the way around the ramp. It was obvious in the line for breakfast (free for fly-ins) that they had not expected the volume of planes that attended. One factor causing the added traffic may have been their advertising that they would be selling aviation fuel at their cost for attendees. I took advantage and filled all my tanks – saving just about $1/gallon over my home field. It probably would have been smarter for them to sell it at $0.10 over cost or something similar – still a great price.

Here are a few photos I took at the event: 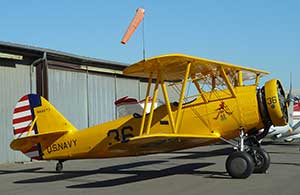 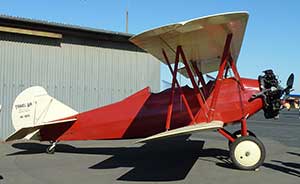 A short look at the planes in Mojave

This is from CNET. The article is part of CNET’s Road Trip 2012 coverage. Not much text but almost 30 photos.

Curtiss Jenny to be part of PBS special

This is from krqe in Bowling Green, KY. Harry Balcer of Bainbridge, OH is an airplane enthusiast, In 1979 he bought construction plans for a Jenny from the Smithsonian Institution. Life got in the way for a while, but for 15 years he had been building his dream. When Dorian Walker was doing research on the number of Jennies still remaining he ran across Balcer’s project. Balcer has sold the project to Walker, not an aircraft builder himself. Walker is gathering a group of volunteers in south-central Kentucky to finish the project as he films the process for PBS.

This is from the Milwaukee Journal Sentinel via AviationPros. Chip Yates is another individual who intends to retrace Lindbergh’s flight across the Atlantic, not really that difficult with today’s navigational and aircraft capabilities. Yates, however, is adding a new twist – his airplane will be powered only by electricity…