Here I am, sitting at my computer again in a room someplace other than home. Yeah, I’m out on another airline trip. I’m awake again after sleeping for about five hours and it’s still dark outside. Why did I wake up? A couple of reasons. For one, the time zone where I live told my body it was time to wake up and for another, it seemed that the bed was shaking. 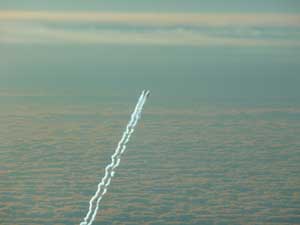 My semi-awake brain said ‘Hmmm, that doesn’t seem right’ and woke me up to the point I couldn’t sleep any more. I took out my earplugs and lay in bed for a while. That’s when I noticed the winds howling and rain slamming against my ninth-floor window. Maybe I just felt a strong wind gust hit the building.

I gave up trying to sleep and turned on the TV.  CNN Asia was talking about a 7.4 earthquake off the SE tip Japan’s main island. Mystery solved – it wasn’t just a dream. They were playing their Tsunami card, explaining that islands near the epicenter could see a 2-meter surge while the coast of Japan could get a 1/2-meter wave. With this storm that’s already in progress I think they’ll have a hard time picking that particular wave out of the mix.

The pounding rain shot down the idea of walking around the area today and brought up the vision of a cold, wet and windy exterior preflight for our flight tonight. I really should have packed that plastic raincoat.

We got here in the early evening last night. I got to my room, cleaned up and went down to the restaurant looking for dinner. I was seated and advised that the were having a ‘special’ Christmas buffet – crew price worked out to $30. I looked it over and it appeared to be just like every other buffet that they have here – except for the chocolate fountain in the dessert area. That explained why there weren’t any other crew members visible in the restaurant – the ones who were eating were in the sports bar ordering off that menu. I opted for an order of pasta, a salad and a glass of wine at half the price of the buffet.

If you travel infrequently, hotel buffets can be an interesting experience and often a way to try some of the local dishes. When you travel for a living and stay at the same hotel over and over you notice that the buffet fare rarely changes. There is usually comfort in consistency – but not in this case.

The sun is just starting to come up now – well it’s getting light outside. Solid low clouds, fog and rain. It looks like another day for hotel hobbies. I’ll probably spend it emptying out my email  inbox and closing a bunch of browser tabs holding articles I thought I may want to read. With a bit of luck I’ll get tired again and will be able to take a nap before our evening departure – heading southwest to warmer temperatures in Bangkok, though the humidity will probably stay pretty close to the current 100%.

After I wrote that last paragraph I worked on getting some photos off of my camera storage card and formatting them to include in this post. It didn’t take long, maybe a half hour – I had to search for my camera cable. Anyway, now as I look outside and, although it’s still a bit foggy, I see that the sky is almost clear blue. What clouds that remain are moving off at a fast clip. It’s going to be an interesting flying day. 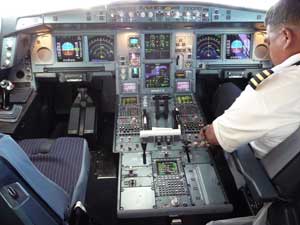 I took this shot as I was about to leave the cockpit – waiting at the cockpit door for the captain to return from his break. I had been occupying the left seat while the captain was sleeping. We logged 10.3 hours for the flight.

Rats. Another storm is moving in. I can see the clouds/fog rolling in below my room level. I wonder how many crew members are getting caught out doing their morning run….