No flying this week. It was actually rainy here for most of the week – a nice change for the high desert.  Everything is actually starting to turn green again.  Of course the cold front bringing the rain also brought below-freezing temperatures last night.

This weekend should be nice. Saturday is the Reno-area Safety Stand-down. Three hours of safety briefings  sponsored by the FAA Safety Team. Sunday might be a good fly-to-breakfast say, though. 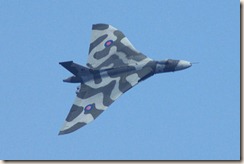 A C-46 pilot remembers
This is from the Charlotte Observer. Jeb Stewart, now 91 years old, had a chance to relive some old memories when Tinker Belle, possible the last airworthy C-46 visited the Charlotte-Monroe Airport.

Another last of its kind.
This is from SeattlePI. The Curtiss MF Boat was a Glenn Curtiss design from 1918, purchased by the Navy to be used to train pilots for flying the Curtiss F Boat. There is only one example of the MF Boat in existence – housed in the National Naval Aviation Museum in Pensacola, FL . Here is a list of the other aircraft that they have on display.

British Vulcan Bomber – yes, yet another last of it’s kind still airworthy
This is from the Yorkshire Post in the UK. Engineers had planned on flying the Vulcan Bomber as part of the renewal of it’s Permit to Fly  for this year’s show season, but were thwarted by low weather at the Robin Hood Airport in Doncaster. This is a short article but includes a video clip just under 3 minutes long.

And a Quiz Question:

What is unusual about the month of July this year? And just how unusual is it?