Remember back to the last time you were at an aviation event such as Sun & Fun or Oshkosh or one of the larger fly-in events.  Do you remember looking at one of those beautiful big biplanes 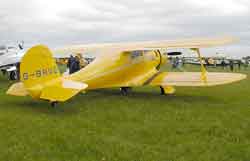 that had been restored to pristine condition, the frame covered with taut fabric painted with layers and layers of hand-rubbed lacquer? Or were your eyes drawn to a Classic aircraft that had been restored to a gleaming vision of metallic perfection.  Is there a possibility that you then stopped to ponder what type of person would spend thousands of hours of meticulous work and twenty or thirty times that number of dollars to restore the aircraft to that condition? Or did you wonder where that restoration took place? Was it done by a professional shop or did the owner do the work? How did they know what the finished project was supposed to look like? Did they have all the original parts or did they have to search for them or make new ones themselves? And why did they pick that particular aircraft to restore? 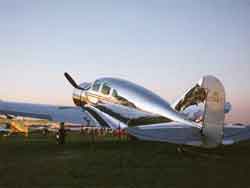 There are aircraft all over the country that are in various stages of restoration, changing from hunks of rusted metal parts and torn fabric into those beautiful examples of the way flying used to be. It seems that most of the articles we read and the information that we are presented is aimed at the latest in glass-panel technology or automation or slick composite speed-demons. There are some pilots and mechanics out there, though, who devote their aviation careers to flying the way our ancestors flew – with wind in the wires or with the window rolled down and their elbow on the sill and a throaty radial engine providing the power. They are the people who would rather follow power lines or country roads as they fly low enough to smell the newly mowed fields and land on the grass runways that their aircraft were designed to use.

I have been to several airports around the country where these types of people seem to congregate. One airport, Creve Coeur (1H0), near St. Louis, MO ( also known as Dauster Field) comes to mind. Just walking around the airport and looking into the hangars is like visiting one of our finest aviation museums.  Another  airport that my wife and I just recently revisited is Sonoma Valley (0Q3) also known as Schellville Airport, near Sonoma, CA.  We drove to the San Francisco bay area to finally take advantage of an offer of  a ride in a friend’s airplane. When we got there we were also treated to the airport’s “open hangar day.”

California has a tax of some sort on just about everything, including personal aircraft. However, if the aircraft was manufactured before a certain date the personal property tax on the aircraft can be waived if the aircraft is put on display a minimum number of times throughout the year. An airport Open House qualifies as a “showing” and the airport management provides a certificate verifying that the aircraft was on display for the public.

I took photos as we wandered around the airport after our flight and have a few posts in progress that will describe some of the planes that we saw on display as well as one about the outstanding experience we had flying that morning.