A Pair of Captains

My last two trips have been unusual in that both captains that I flew with own and fly their own aircraft – and both own more than one.

On the first of the two trips, a 9-day trip back and forth to Europe, the captain was a fairly quiet guy who kept to himself. I never saw him on any of the layovers, though that’s not really unusual lately. He was always friendly, he just didn’t appear to be a really outgoing type of person.  I noticed that on his breaks he was reading a book on spin aerodynamics. 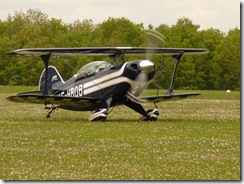 I tried to think positively and assumed that he wasn’t studying for something that  he expected to experience in our Airbus A-330,  so I asked him about his non-airline flying activities. It turns out that in his spare time he teaches aerobatics and flies airshows in his Pitts S-2B. He has an A&P license and is restoring an Extra 300. Most of the work is done on the Extra and he is about to replace the fabric covering on the aft half of the fuselage   He flies out of a small airport in the upper Midwest.

A couple of days into the second trip, a 12-day Asia jaunt,  the captain asked about my tie-tac(a small ceramic Swift). It usually takes another pilot 3-4 guesses to get the aircraft type correct or they just give up and ask. This captain got it right on the first guess. That started a conversation about small planes and general aviation flying. He lives in southern Nevada and owns both a 1960 Bonanza and a 1940’s vintage Cessna C-140. He said that he has had the 140 for almost 40 years. Throughout the trip we’d get back to talking about the Bonanza and the things that he has done to it since he purchased it – the new paint, interior, radios, engine instruments, etc. 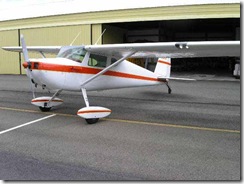 He is a big proponent of XM weather in the cockpit and now that he has it available finds it hard to imagine how it was to not have all the information available during a flight. He said that his wife doesn’t particularly like to fly but enjoys the destinations that they visit. He has provided her with a nice noise-cancelling headset and access to all of the XM radio channels and inputs for her iPod, so she passes the enroute time in her own little world of radio broadcasts and her favorite music.

None of the First Officers that I flew with on either trip were involved with general aviation flying. It could be a function of economics, though both captains had been involved in general aviation for their entire airline careers.  Pay scales today, however, are far different than they have been in the past and no longer result in any significant leftovers after normal bill payments and retirement planning set-asides are made.

It was nice to spend a couple of trips talking about fun flying, airplane equipment and places to fly. Too many times lately other pilots I meet are more interested in complaining about the latest ‘hot topics’ running around the airline rumor mill or how they think that the current airline operations have deteriorated.