We successfully completed another two crossings of the North Atlantic to complete our six-day trip. Our flight back to Europe was with the same plane with the inoperative APU that had caused us all the problems on the previous crossing. This time, however, things went smoothly. One important factor was that the plane had been plugged into the jetway power cord all night and it had not been raining. My guess on the problem we had with our rainy-night arrival was that the power plug had probably been hanging from the jetway with the pin portion of the plug facing up into the rain. Any moisture spanning the pins of the plug would have been sensed by the aircraft power system and rejected as a short. So even with the cord plugged in and the jetway system saying it was working, the aircraft wouldn’t accept it as a valid source of power. 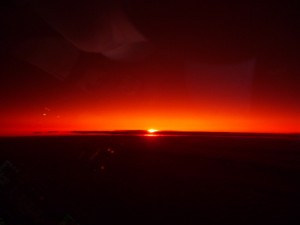 Our engine start at the departure gate followed by the pushback and cross-bleed start went smoothly (it helped having gone through the whole process the previous day) and we were soon on our way again.

I had the first break so, after filling out the flight plan times and checking that all was going well, I left the other two to find their way to Newfoundland and our coast-out fix for the crossing.  The dispatcher had advised us during our flight briefing that we should have a nice smooth flight and that although the weather at our destination was at that time not very good  it was forecast to improve by the end of our eight hour flight time.

The first lie was that the flight would be smooth. So much for me getting any sleep during my break. Light to moderate rocking just doesn’t put me to sleep. The ten hours of sleep that I got the night before probably didn’t help either.  I returned to the cockpit and the captain took his break just as we were crossing the North Atlantic coastline. The crossing was fairly routine with intermittent light turbulence. We had been keeping track of the weather at our destination and discovered the second dispatch lie – the weather wasn’t improving. For a while it even got worse.

The captain came back to his seat and the other first officer went on break as we crossed the Scottish coastline. Once we were in VHF datalink range we were able to get the latest ATIS for our destination. The conditions were holding pretty steady at 100’ scattered, 200’ broken, mist and RVR readings of 350m, 450m, 450m. The visibility requirement to fly a CAT I ILS to the active runway is 550m while the CAT II minimums are 300m. So, the weather was good enough to fly a CAT II approach. We made the decision to brief and fly a CAT III approach in this case because the weather was not improving and could easily drop down below the CAT II minimums by the time we were ready to land. The CAT III minimums for this runway are 75 m which gave us plenty of weather deterioration space.

For CAT III ILS approaches we couple the autopilots to the aircraft and let it fly and land automatically. There is no height above the ground at which we must see the runway. We set an Alert Height into the autoflight system at 100’ AGL measured by the Radio Altimeter. The aircraft gives an aural indication approaching and reaching the alert height. As long as we have not received any autopilot or auto-throttle warnings or equipment capability downgrades by that time we just let the aircraft flare and land on it’s own. We manually reduce the power to idle and deploy the thrust reversers but the airplane does everything else.  In this case the weather was good enough that we saw the runway approach lights a little above the alert height, probably around 125-150’ AGL.

Once the aircraft is on the runway and slowing to a safe taxi speed we have to remember to disconnect the autopilot before trying to exit the runway. The aircraft will resist any attempts to turn since the last thing it was told to do was track the ILS localizer. The next challenge with the low visibility is finding the gate at the terminal. Most air carrier airports that routinely experience these low visibilities have a system in place to help you find your way. The taxiways have centerline lights (green) that illuminate to show you the correct route and signs are placed at the edge of the taxiway to indicate points where you call the ground controller and confirm your position. More airports are now installing ground position radar so that the controllers can follow your progress on the ground.

We had landed on the runway farthest from the terminal so it took us a while to get to our gate. We finally made it, deplaned the passengers and worked our way through the customs and immigration process. Finally it was time for the layover to begin. I’m getting pretty good at that part.

I can’t believe it has been over a week since my post at the beginning of my last airline trip. I never did catch up on my sleep on that one. It’s amazing how much energy gets drained with too little sleep and days on the wrong side of the clock. 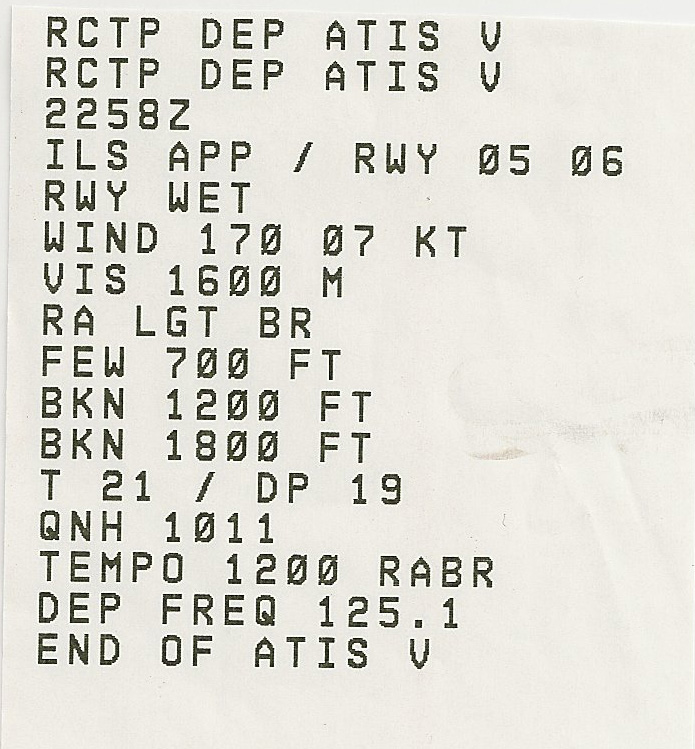 The Asia trip went fairly well. The weather in Japan was really nice. Clear and in the 70s (F), but it rained almost constantly in Taiwan. This is a printout of the TPE ATIS at our departure time. It didn’t take long to disappear into the clouds. But, as usual, the tops of the clouds really looked beautiful. I have buying a new, small camera on my list of things to do. The photos that I have available to include in posts were taken when I was flying as an engineer and had more room in my flight bag. I was carrying a ‘standard size’ Olympus camera.

Now that I’m back home for a little while, I’m spending my days working on my plane, trying to get it into flying condition. I’ll post more on that in a day or two, along with photos of the progress. It looks like I’ll have to wait until next month to finish the annual inspection. I leave again to commute to work on Friday morning, this time for a 9-day Asia trip.