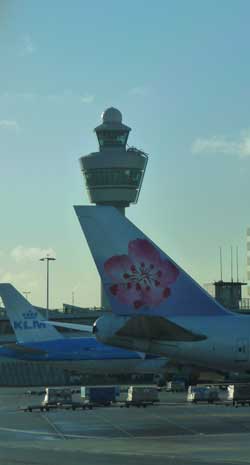 If you have been following along you know that my last trip was to Europe and shuttled in and out of the Amsterdam a few times.. The last leg of the trip was from Amsterdam to Seattle. I had the first break for that leg, so I was in the cockpit jumpseat for the takeoff and until we got to cruise altitude. Then headed for the bunk to get whatever sleep I could manage.

Once in a while I’ll see an airline livery that I don’t recognize.

I took this one while we waited for crossing traffic on the taxiway. The unusual tail marking on the closer of the two aircraft caught my attention. I didn’t get a look at the aircraft fuselage, so I still have no idea which company/country flies the plane.

We were assigned runway 36L at Schiphol –

the runway that is the farthest away from the terminal. Here we are stopped on the parallel taxiway waiting to cross runway 36C – watching the usual stream of KLM departures.

There are several wind turbine farms

Not far to the north of the airport we pass the Amsterdam Container Port. 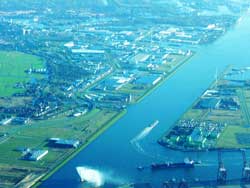 There seemed to be a lot going on the day we left. Either they were really excited that the ship under tow was finally leaving or they were out testing one of the fire boats. You can also see more wind turbines near the center of the photo. 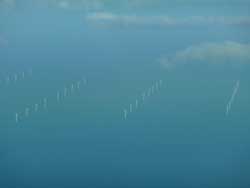 this one off the Netherlands coast in the North Sea. Seems to me to be a great location for the turbines, giving them unobstructed airflow from virtually any direction.

[As usual, all of these small photos link to larger versions.]