I mentioned the last time that I had been having problems sleeping in the European time zone. I guess I reached my limit of sleep deficit on that layover. 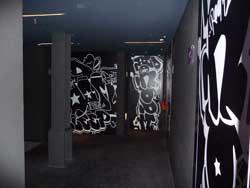 We reached our layover hotel and were checked into our rooms by about  10:30 in the morning. Some of us on the crew said that we would meet in the hotel lobby at 5 pm to go out in search of dinner. I eventually found my room – this is the look of the alcove where my room was located. I won’t go through all the comments I heard from the crew about the decorating motif of the hotel. There’s just not enough room in this column.

I partially unpacked, set my travel alarm for 4 pm, put the alarm clock next to the bed, crawled under the covers and fell asleep. I next woke up at 7:45 that night – never heard the alarm. (Yes, I checked it – the alarm was set and working.) I made some coffee, did a little computer work and headed downstairs for dinner. I was not familiar with the area around the hotel, it was a dark foggy night and I had seen a lot of tagging(graffiti) on the buildings in the area so I elected to just eat in the hotel restaurant. It was a very good meal, though expensive (even with our airline discount). Fifty-dollar meals quickly run through the per diem expense we are paid while out on trips.

That box checked, I went back to my room, checked email again and went back to bed. That produced another 5 hours of sleep and I started to feel human again. Our wake-up call came at 8 am for the flight back to JFK and we were soon in the bus headed back to the airport.

I apologized to the crew for missing the dinner date and found that those of the crew who had managed to wake up at the appointed time spent about an hour walking around the local area looking for a dinner spot. Most of the local restaurants (the hotel included) didn’t open for dinner until after 7 pm.

It was obvious during the drive to the airport that we were going to need a take-off alternate for the departure. The visibility was down at CAT III ILS minimums again. The Milan airport is located in a low area near a river. Go figure. It was a long, interesting taxi to the end of the runway – taxiway signs and holding point markers were slowly appearing out of the fog.

On departure we broke out of the low clouds at about 1500’ AGL into clear blue skies and a beautiful view of the Alps. It wasn’t long after that when I went back to bed again – sounds like that’s all I do. I happened to have the first break for the flight, so once safely on our way I headed for the pilot bunk for a couple of hours.

When I returned to the cockpit we were already over the Atlantic and making our way along our assigned North Atlantic Track (NAT). 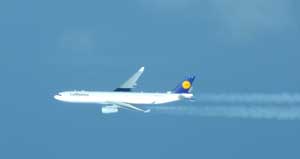 The tracks are an organized system of routes (which change each day) controlled by Shanwick and Gander Oceanic Controllers. The NATs are like highways between the two continents with specific navigation points that require strict adherence to altitude and speed assignments. This Airbus A-330 was on our track 2000’ below us and apparently restricted to a slower speed than us. In listening to the airline chatter the winds at our altitudes were not different enough to allow us to pass them as quickly as we did. The only deviation to the assigned track that is allowed is what is called a Strategic Lateral Offset (Procedure) – yeah, referred to as a SLOP. We can offset laterally from the assigned track to avoid the wake turbulence generated by the aircraft in front of us. The offsets are always to the right and are restricted to 1 or 2 miles. That is why the Luftansa aircraft was off to our right – probably offset  a mile.

We made landfall again just north of Gander, Newfoundland and turned southwest toward New York. 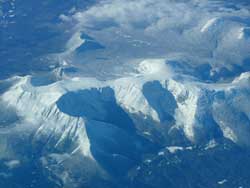 As we flew southwest we looked down and saw what looked like an old volcano in the middle of the state of Maine. It turns out that it is not volcanic, it just looks that way. Alpine glaciers carved out the depressions in the mountain, which is located in Baxter state Park. Mt Katahdin is the tallest mountain in Maine reaching 5270 feet about  sea level.

Now its almost time to head east again – this time to Amsterdam for the day/night. We’ll arrive early morning and leave the next morning. I expect I’ll sleep most of the day again.