A little background is in order. I purchased this airplane, a Globe Swift, in late 2004 from an estate (funny, it seems longer than that….) . The owner had died suddenly a few years before. The plane and been sitting, unused in an open-air hangar since he passed away. I don’t believe it had been rolled out of the hangar more than a couple of times and it had not been flown.

I bought it at a price I thought was reasonable at the time. I knew that it would be a major project, but I had no idea it would be as much work as it has been so far, and I’m far from finished.

I finally flew it for the first time about a year ago and have, maybe 10 hours on it so far. Every flight seems to generate another list of things than need work.

The last flight resulted in the need for a rebuild of the landing gear struts, actuators and downlocks, the last parts of the hydraulic system that I had not yet rebuilt. Fluid has been seeping from the actuators and downlocks and the struts had a little fluid running down them, so it was probably past time. This past winter finally did-in the rubber seals and made the rebuild mandatory.

As with anything mechanical having to do with an airplane, you make your best guess as to how long the project will take, then you double it and go to the next higher unit of time. So, a 1-week project will probably take two months. Then you throw in that 4-letter word: work, and you re-estimate. 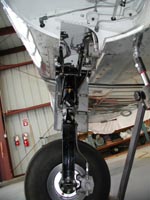 I didn’t like the fact that the gear parts were painted black the last time they had been rebuilt, so I added stripping and repainting to the list of things to do. This is a photo of the right main gear, taken after I had already removed the left main from the airplane and started the rebuild process. The work isn’t hard, just time-consuming. Seal kits are available, so it’s just a matter of remove and replace. There is also a Hydraulic Manual available that shows how the units (strut, actuator and downlock) are assembled and where the seals are found.

Once the different units are removed, the paint is stripped, a very nasty process requiring high-quality gloves and a respirator if you are going to take the best precautions. Then a quick run in the bead blaster to clean that last of the paint off, a good cleaning and then a coat of primer and two of silver/aluminum paint. After drying for a day or so, the seals are lubed and installed and the units reassembled. The strut requires that a hydraulic press be involved as these struts are of the spring/oil type. A large coil spring is inside the strut that must be compressed in order to remove or reinstall the chrome strut in the upper gear leg housing. 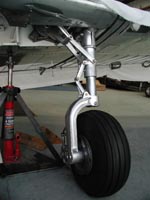 Of course, what I thought would be a quick job has now run into the second month. Though I have at least progressed to the point where the left gear strut, actuator and downlock are reinstalled in the wheelwell. The hydraulic lines have not been reconnected, so a retraction test has not been accomplished on the rebuild mechanism. The brakes have not been reconnected and the gear door has not been cleaned up and reattached, nor have the wheel bearings been cleaned and repacked. That will all have to wait until after my next Asia trip, leaving tomorrow.

Work always seems to get in the way. At least it’s flying and not traveling half way around the world to sit in meetings. Although, if it weren’t for people who needed to do that, there would be no need for me to do the flying. Vicious circle.

Time to go pack. Oh, I bought that new camera. I’ll see what I can do. So far, I know how to turn it on…