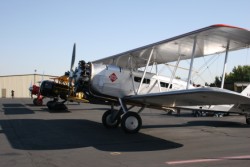 The week after the Reno Air Races Reno had a visit from three aircraft completing a recreation of the cross-country airmail route between New York and San Francisco.  The three aircraft taking part in the flight, Addison Pemberton’s newly restored 1928  Boeing 40C, Ben Scott’s 1930 Stearman 4E Junior Speedmail and Larry Tobin’s 1927 Stearman C3B made an overnight stop at KRNO before the last leg of their adventure. You can read more about the Airmail Odyssey in the Special Features section of the Air and Space Magazine website. 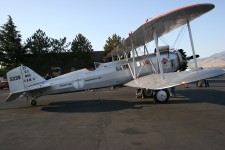 Addison Pemberton has been flying his Model 40C to most of the major airshows this year, including Oshkosh and Blakesburg. He and his family completed the amazing restoration earlier this year with the first flight on February 21st . The aircraft and it’s restoration have been covered extensively in several aviation publications. There were only ten Model 40s built by Boeing, nine for it’s Pacific Coast service and one for National Park Airways. In addition to the large cargo bay just behind the engine, a compartment in the fuselage accessible through an outside door above the left lower wing seats four passengers.This aircraft is the only example flying. For those of you  in the Reno area or who attend the Reno Air Races, Addison has said that he is entering the aircraft in the 2009 National Aviation Heritage Invitational, so it will be on display during Race Week. 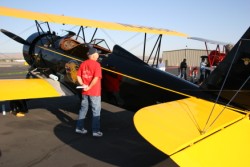 The “Stearman 4” airplanes, the Junior Speedmail, were basically designed as a high-performance sport-plane that had qualities that led to it easily being adapted for commercial uses. When operators moved to use the aircraft as a mail carrier, Stearman converted the front cockpit area to a bin capable of carrying a 600-lb payload, plenty large enough for the average mail run. This model was designated the Model 4-EM, the M designating the conversion to a mail carrier. The model 4-EM was then designated the “Senior Speedmail.” Ben Scott is a Reno, NV resident and business owner. 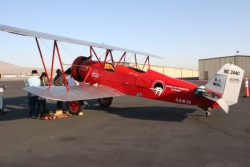 Larry Tobin’s Stearman C3B is painted in Mamer Air Transport livery from the Spokane, WA area. It had it’s first flight out of restoration on May 17th of this year and, as serial number 104, is believed to be the oldest flying Stearman aircraft. Tobin bought the aircraft in 2006 and did a complete restoration with extensive fuselage structural repairs.

On a sad footnote, although the Airmail Odyssey from New York to San Francisco was completed successfully, not all of the aircraft pictured here made back to their home field without incident. Both the Boeing Model 40C and the Sterman 4E Speedmail made it home, but Larry Tobin’s Stearman C3B experienced and engine failure enroute home to Spokane. Larry managed to skillfully put the plane down in a pasture, however the morning dew on the grass prevented him from slowing the aircraft before reaching the end of the field and rolling at a moderate speed over an embankment. He did the only thing that he was able to do and aimed the plane at a tree to stop. He was unhurt, however the aircraft sustained substantial damage.

And on a happer footnote I understand that now, in the Spring of 2009, the C3B has been rebuilt and is flying again. Congratulations to Larry and the crew for bringing this great plane back to life. Great job!