I’m half way through my first trip of the month, meaning I just finished my second Atlantic crossing. Once we get into the air the flights are usually fairly uneventful. The hard part, it seems, is getting away from and into the terminal.

Our flight back to the U.S. yesterday left the gate an hour late. When we got to the airplane the gate agent informed she had been told to delay boarding passengers because maintenance needed to do an engine run.  Hmm, maybe she meant the APU. It had been written up by the inbound crew. The dispatcher hadn’t mentioned anything about the engines when we had received our flight briefing 15 minutes ago.

It turned out that the maintenance post-flight inspection had revealed more than normal oil in the bottom of the cowling of one of our engines. Further inspection led them to the suspect part and the discovery of some damaged rubber O-ring seals. Apparently the seals had been damaged during installation when the part had received attention at a previous station.  The local mechanics had removed the part again, replaced the seals and reinstalled the unit. Now they needed to run the engine to make sure that the seals were correctly doing their sealing job.

The process was further complicated because the APU had been placed on sick leave for the flight . 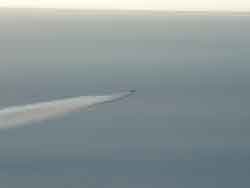 That meant that a ‘start cart’ would be needed to provide air to the engine’s starter. It is not normal to have a start cart positioned at each airline gate so one had to be located and then brought to our gate, connected to the plane and then put into operation. The maintenance crew took over the cockpit and ran their checklist, started the engine, inspected it while it was running and shut it down. The O-ring seals where operating as designed. Now the paperwork process started.

We returned to the cockpit and started our checklists while the passenger boarding process began. Our passengers where seated in record time and our final checks were made and the boarding door was closed. We were ready to start the engines and the pushback crew was ready outside but the paperwork wasn’t complete. Our departure procedures now require that we have all of our passenger and cargo information in hand before we push back from the gate.  In anticipation of this happening efficiently, we coordinated with the ground controller to start one engine at the gate so that we could disconnect the electrical cord that was providing us power and disconnect the start cart that was providing the air to operate the engine starter. That would put us on ‘aircraft power’ and allow us to be pushed back. We were soon sitting at the gate with our right engine at idle and all umbilical cords disconnected. But we still didn’t have our load information.

The problem appeared to be centered on the maintenance that had been performed on the aircraft and it’s effect on our ETOPS capability. Our load data and take-off information was ‘locked out’ until maintenance entered into their system that the aircraft was repaired and certified as ETOPS qualified.  The APU on this aircraft is capable of being started and operated in flight and is our back-up source of electrical power in case of an engine failure. The lack of an operational APU removes our back-up electrical source. Several other types of maintenance operations added to that failure can disqualify the aircraft from ETOPS operations. We would then require a flight plan routing that insured suitable landing alternates within a specific distance. If no alternates were available or  if the weather at those alternates was not suitable we would not be able to depart at all.

It took almost a half hour, but the maintenance lock-out was removed and we were finally cleared to depart on our original route. 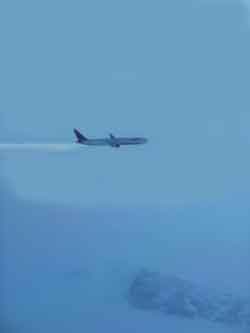 The pushback went smoothly and we used the operating engine to provide air to start the remaining engine, a process called a cross-bleed start. We were soon on our way back to the U.S. Our cruise speed of Mach .82 doesn’t often allow us to pass other flights, but one aircraft with a slower cruise than us is the Boeing 767. We passed this Delta flight just as we were crossing the southern tip of Greenland.The lighting wasn’t very good and there isn’t too much to see in Greenland this time of year that isn’t white, but I took the shot anyway.

The flight went smoothly until we arrived at our destination – at night, in the rain.  The approach and landing went fine, but we soon found ourselves sitting at a terminal gate with one engine running – again. We had send a text message to our destination reminding them that we did not have an APU and would need external electrical power connected to the aircraft before we could shut down the engines. We called and reminded them again after we cleared the runway and were making our way to the gate. Then we stopped at the gate and waited for the electrical cord to be plugged in. The jetway electrical cord wasn’t working and the ground crew would have to go find an electrical cart and bring it to the gate. I have no idea where airports store these things, but it always seems to be a half hour away from wherever they are needed.  Another one of those unwritten laws of airline operations.

At least the hotel van was sitting there waiting for us.