Here are some flying stories from the past week that you may have missed. 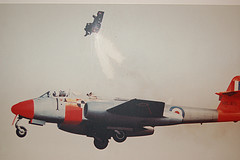 This one if from FT.com. Linda Maloney finally found herself flying a for the Navy – it was in a support aircraft, but it was flying. Then one day she became the first woman to … Well, you read her story.

This year’s women’s Air Race Classic is about to start
This article is from tribstar.com. there are 50 2-person female teams entered in this year’s Air Race Classic. Two of them are going to fly an open cockpit, amateur-built aircraft around the 2500 mile route.

Another person who was involved with an aviation first.
This is from the LA Times. Who would think that one of the crew members – a flight attendant in this case – from the first airline flight that was ever hijacked would still be around. Yes, she has a story…

Part 1 of a wing-walker’s story.
Part 2 of the story
This one is from Murfreesboro, TN. It is a 3-part article they call Love in the Clouds. The story is about Louie Gasser and Nora Lee Davenport. Gasser was Nashville’s first civilian commercial pilot and still hold the patent on advertising banners towed behind aircraft. Davenport became his wife – and wing walker. Her story is in part 3 which will probably be published Sunday (19th). You can access it by clicking on one of the Tags at the bottom of either article.

Yes, Bugatti built an airplane, too…
This article is from Tulsa, OK. A group of aircraft builders are trying to build an exact copy of the Bugatti 100P. The original aircraft never flew and remains in the EAA Museum in Wisconsin. The designers were building the plane when WWII broke out and, to prevent it from falling into German hands, they dismantled it, put it in crates and stored it in a barn in the French countryside. They are hoping to have the replica at EAA AirVenture this summer.

A Bleriot XI replica takes flight
This article is from Wired Magazine. It describes the EAA replica of the Bleriot XI that just made it’s first flight recently. It is a totally authentic replica down to the original three cylinder Anzani engine that they say hadn’t flown in 100 years. Nice photos.

My apologies to the AOPA eNewsleter writers – this is lifted completely from the latest issue. Sounds like an interesting seminar.

Venture beyond Bernoulli and Newton in a live Air Safety Institute Webinar, “Aerodynamics: The alpha factor,” at 3 and 8 p.m. Eastern time, June 20. Join AOPA Foundation President Bruce Landsberg and panelists Rich Stowell, master aerobatic instructor, and Brian E. Smith of NASA’s Ames Research Center in an energetic review of aerodynamic principles beyond the four forces of flight. As Landsberg leads a fast-paced discussion with amazing video clips you’ll discover the true meaning of power and pitch and what flying angle of attack is all about. This Webinar, sponsored by the AOPA Insurance Agency, qualifies for AOPA Accident Forgiveness and the FAA Wings program. Register online >>

And one last item – This week is the Pylon Racing School at Reno-Stead Airport. There were 116 pilots and crew members registered for the event this year. There are a lot more jets in the course this year than I have seen in the past. 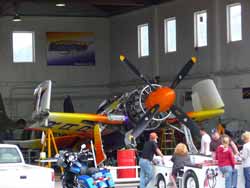 And wonder of wonders – Rare Bear was out flying yesterday. The team has a new maintenance manger and dedicated team of workers. They appear to be way ahead of the game this year – in past years it wasn’t unusual to see them finally get airborne on the last day of qualifying during race week in September.