Before There Were VORs

In October of last year I had the opportunity to fly in an original Curtiss JN-4H “Jenny” . I mentioned then that it had acted as a time machine, propelling me backward in time to when aviation was just getting started. Flying the Jenny got me thinking more about what it must have been like back when instrument flying was just beginning.

When the early mail and passenger routes were being developed it became obvious that some accurate means of navigation would be required to make the flights more reliable. The use of beacons shining lights or signal fires 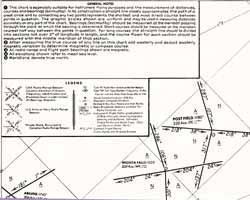 were acceptable first steps, but aviation leaders could see that flight in less than ideal weather would be necessary. The logical solution was radio-based navigation. The first iteration in radio-based navigation was the Low-Frequency (LF) Radio Range, also called the A-N Range and the Adcock Range (after the designer of the LF antenna array).

I had heard about A-N Range navigation but had not read much about them or how they were used. A-N Ranges were deployed in the 1930s and 1940s and were replaced with the more modern and accurate VOR navigation in the early 1950s. 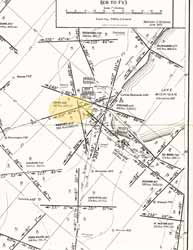 items. He was nice enough to pass some of them along to me. His father had been a military pilot and had kept flight manuals from a variety of aircraft. He also had among his aviation memorabilia 2-3 Low Frequency Radio Range navigation charts.  This section of one of the charts shows the area around Chicago, IL. while the one above it shows the section containing the chart legend.  these are sections of the CG to FV chart (Chicago to Ft. Worth, TX) that, according to the distance legend on this section was drawn in 1938 and redrawn in 1942. I have highlighted the area around Joliet, IL because in researching information about A-N navigation I found myself (of course) at the Wikipedia entry for the subject. One of the pieces of information I found there was an instrument approach chart for the Joliet, IL airport using the radio beacon shown on the navigation chart. 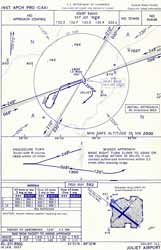 Then, as a final push to get me to finish writing this article, the June issue of the AOPA PILOT magazine has an article by Barry Schiff on navigating the A-N ranges (Play it by Ear, p. 30) and related that an actual A-N Radio Range has been reconstructed and put into operation by Airline Transport Communications, Inc. and International Radio Station WWRB.  Their web site has a link in a YouTube video discussing the project and demonstrating it’s use on an actual flight. Here is the video for your added entertainment and education.

A 10-minute video with an actual flight on a reconstructed A-N low frequency radio range.