I finally  was able to go flying in my plane a couple of days ago, the first time this year.  It was just a short local flight for a little sightseeing and then six patterns to remind myself that I could still land the Swift.They were actually pretty good landings for being off for so long. I can say that since nobody was along to refute my claim.

I finished up my airline training flight and commuted back home just before Christmas. Unfortunately two days later my name was on the sick roster. 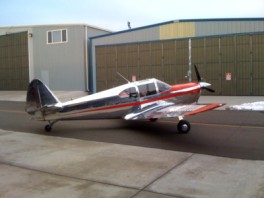 I caught some sort of viral thing that took almost two weeks to clear up enough that I could call myself airworthy. I didn’t make any friends in the scheduling department by calling in sick over Christmas and New Year’s, but I had no choice.

Just when I thought I would be able to spend some time at the airport a weather system moved in that nixed any plans that I had for flying. A big high pressure system was camped overhead and a low off the west coast was pumping some warmer temperatures and moisture into the area. The higher temperatures coupled with the moisture and the remaining snow on the ground set up great conditions for the formation of fog. We also had a rare set of days with little to no wind to clear things out. Every morning I’d get up, look out the window and call the AWOS number to see what it was like at the airport. And every day the computer-generated voice would say “sky obscured 100′ overcast, visibility less than 1/4.” Not great weather for driving, much less flying. Most of the days the low clouds and fog would hang around until mid to late afternoon, breaking up and lifting enough to barely be called VFR  shortly before sundown.  One day I went out to the hangar anyway and got the plane ready to fly, turned on my home-made engine pre-heater and went across the taxiway to see what my neighbor was doing. About 45 minutes later I figured that the engine was heated enough ( the outside temps had been around 45 degrees during the day) and I’d have about 45 minutes of daylight left. I walked out of his hanger to go back to mine and found that it was raining! I couldn’t win. I unplugged the heater and headed home again.

A couple of days later I had again been keeping track of the AWOS recording and heard that the overcast was beginning to break up, so I headed for the airport again. The plane was ready to go, so I plugged in the heater and then went to the local cheap gas place and filled up my truck. By the time I got back the engine was toasty warm (oil temp registering 80F), so I pulled it out and started up. There was still a high overcast, but the valley where the airport is located was clear. 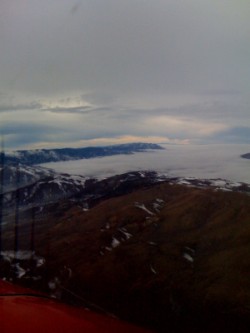 Once I got into the air it became obvious that I wasn’t going to be going very far from the airport. There is a low ridge about 5 minutes north of Stead.  Highway 395 travels through a little pass on it’s way northwest to Susanville, CA. You can see in this photo that I took looking over the cowling that the low clouds and fog  had only receded as far as that low pass. The view was the same to the east, but to the west there was another clear valley, so I headed that way.

When I had taken off the AWOS said that the temperature was 43F at the field elevation of 5100′. I was cruising at 7500′ and my OAT gauge said it was 51F.  Hmm. Out of curiosity I fired up my handheld GPS (an old Lowrance) and checked my progress. The GPS said I was doing 140 mph over the ground as I headed west. I plugged in a few more numbers and found that my TAS was about 155 mph. A bit of a headwind. When I got to the west end of the valley I turned back and headed NE. My GPS groundspeed jumped up to 185.  The flight at cruise was surprisingly smooth, even with that wind in the area.

I did encounter some turbulence as I descended into the traffic pattern and got below the ridge tops, but it wasn’t much more than occasional moderate bumps. The traffic pattern was empty, so I practiced landings for a while. I managed six circuits before another plane made an appearance – the benefits of flying mid-afternoon on a weekday. We have an aerobatic school on the field and their practice area is right above the airport starting at 2000′ above pattern altitude. The Decathlon that took off was heading for the aerobatic box.

It was getting late and I had a safety seminar to attend that night, so I made a full stop landing and headed for the fuel pumps to top off the tanks. That accomplished, I put the plane back into it’s hangar and put the covers back on. I had a feeling that the weather forecast for winds the next day was going to be correct.

The next day dawned clear and windy. By 7 am the gusts were hitting 40 mph at our house. So, I spent the day getting things ready to go back to work.  Four letter word.  I have a 6-day European trip coming up, followed by two days off (which is too little to make it home and back to work) and then a 9-day Asia trip. At least I managed to get one flight in for the new year. Maybe next month the weather will be more favorable for VFR flying. One can only hope.

Spring is right around the corner, right?

The End of an Era