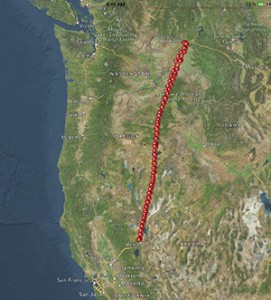 SPOT Messenger flight track to Spokane and back.

As most of you already know, AOPA has changed to a series of Regional Convertions/Fly-ins this year rather than one large event. Their thinking is that they will reach more people by going to them instead of requiring them to travel to AOPA. This month the regional event was in Spokane, WA, at Felts Field. In September the regional event is at the Chino, CA airport in the LA Basin.

Chino is about a half hour shorter flight than going to Spokane but the airspace around Felts Field is a good 10 orders of magnitude less complicated.  I have flown into Chino a few times and I decided I really didn’t want to do it again with 300-400 other planes headed the same direction. 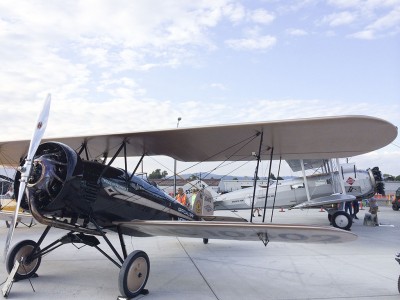 Laird Commercial biplane in front of the only flying Boeing Model 40.

The flight up to Spokane took 3.6 hours engine start to stop. It was a non-stop flight that ended with the fuel totalizer saying I still had 15 gallons remaining, a conservative hour of flight at low altitude. There were VFR arrival procedures published for the convention but when I arrived on Friday just before noon I wasn’t able to comply with the instructions because of weather. I flew the depicted route, but not at the designated altitude. The airport was reporting 2200′ scattered and 6000′ broken when I arrived. About 2 hours after I landed all the clouds decided to get together and have a party – it rained off and on for 2-3 hours. 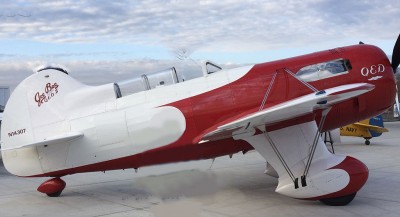 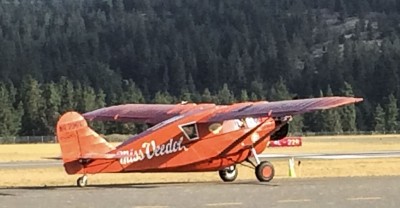 There were plenty of volunteers around to direct me to my parking spot, but I wasn’t too impressed with the parking arrangement. If I had been King I would have started parking arrivals in front of the convention area first and then as available spots filled, progressively move new arrivals farther away from the main area. That would have provided the greatest number of aircraft within the public viewing area for the longest time, would have rewarded early arrivals with parking close to show center and provided closer parking for the arrivals who would be staying the longest and had the most baggage to lug to/from the plane. Obviously, that was not the way it worked. I’ll only say that there were maybe 4 planes parked farther from the convention area than me.

I had never been to an AOPA event, so I wasn’t quite sure what to expect.  About 4-5 days before the event I decided to help out and put my name in as a volunteer. 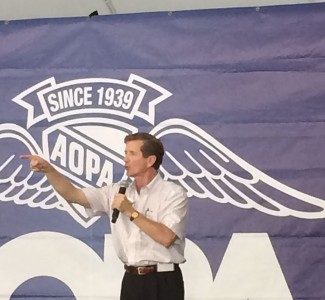 I chose to work Saturday 6am to 11am and was assigned to the air side of the operations – the aircraft parking areas rather than the street side auto parking/directing operations. I ended up on a multi-person crew directing aircraft to their parking area and then, if necessary, pushing the plane into place. There were also individuals assigned as greeters for the arriving pilots and others assigned to take fuel orders and deliver them to the FBO representative.  It was a fairly efficient operation. During my shift we were allowed to take some time out for the pancake breakfast. I had prepaid the $5 fee before I signed up as a volunteer. Volunteers were given a free breakfast. The afternoon crew came on at 10:30 to have a half hour overlap to see how things were working. At eleven I headed out to my rental car and changed my shirt – volunteers were all given a lime-green shirt and AOPA hat to make it obvious that we were on a working crew. We were asked to take the shirt off after our shift. If the organizers needed a runner or someone to accomplish a task on short notice they would look for a volunteer shirt in the crowd. 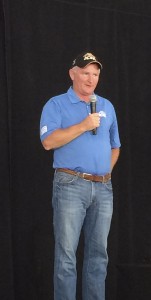 The west end of the convention area had a display of aircraft of various types. I’m not sure how you are invited to display there or if you pay for the privilege – I’m sure that the manufacturers pay as I remember seeing something on the website about reserving display area. There were a few unique aircraft there owned by individuals, though. I imagine they were included by invitation.

After I returned from the rental car I got into line for lunch. Event registration includes lunch and a drink for all attendees. (yes, there is a free lunch.). Food was selected from a variety of Food Trucks parked east of the convention area. You had a choice of  Thai food, burgers, hot dogs/brats, pizza, BBQ and most things in between. I went with the BBQ and had a great tri-tip sandwich. After lunch I attended Rod Machado’s talk on Thinking Small to Avoid Big Mistakes.  As usual, it was a great talk – humorous, fast-moving and efficient in getting the point across to the audience.  The next speaker on the schedule was Mark Baker, the President/CEO of AOPA. He started with an overview of the current efforts/programs in which AOPA is involved – the Third Class Medical, Flying Clubs, the refurbished Cessna trainers, user fees, etc. He then spent about an hour answering questions from the audience. As an aside, both Baker and Machado could be seen talking to small groups of people in various places around the convention area – easily approachable and willing to talk. That is what is making these Regional events much more effective in connecting the AOPA leadership with the AOPA members.

Everything wound down by about 4:30 on Saturday. Rather than trying to get the plane packed and fight my way to the runway for departure with 3/4 of the rest of the attendees I decided to spend Saturday night and leave early Sunday morning. The cafe in the Felts Field terminal opened at 7 am so that is when I got to the airport. I had a nice breakfast, turned in the rental car and made my way to the Swift. I was airborne at about 8:15 and was back in my hangar at Stead by 12:45 with a stop in Burns, OR for fuel. Each leg was 2 hours, so I made sure I had at leas 3 hours of fuel on board for each leg. The second leg was a bit hot and bumpy, but nothing more than occasional moderate. About what I would expect for a high desert afternoon in the summer.

If you have the chance to attend one of the three remaining regional conventions I would highly recommend it. I met a lot of friendly aviation people, learned some things and had an enjoyable weekend of flying and airplanes. What more could you want?