I managed to get the Swift back into the air for an hour yesterday.  I had looked at the weather forecast and today (Saturday) around Reno wasn’t supposed to look very nice. It turned out that they were right. It has rained off and on most of the day and the winds have been gusting around 35kts. Reno-Stead (KRTS) is currently:

The runways are 8-26 and 14-32, so it’s close to being down the runway.  Multiple layers of clouds and light rain don’t really make for a nice VFR day though. The field elevation is 5050’MSL so the broken cloud layer would be at a bit over 10,000′ MSL with those scattered layers starting at about 8200’MSL. Peavine Mountain, 11 nm SW of Stead goes up to 8700′. Donner Pass on Interstate 80 leading to Sacramento tops out at about 7100′ with 9000’+ peaks on each side. Blue Canyon (KBLU) on the west side of the pass is now reporting 200′ BKN  1/2SM with light rain and fog.  Glad I got out yesterday. 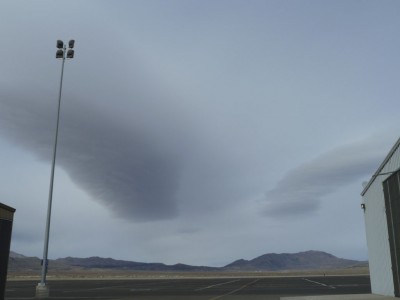 As I got ready for the flight it wasn’t apparent that the weather guys were getting the winds right. I took this photo looking north down my hangar row while my engine pre-heater was doing its thing.  It’s obvious that the upper level winds were forming some waves on the eastern side of the Sierras.

The winds on the ground were reasonable and the TAF said that they were supposed to stay that way so I thought I’d give it a try. I figured that I could always just stay in the pattern. I got up in the air about 2 pm and headed north for a bit – to the end of the valley where Stead is located then turned west to the next valley that direction picked up highway 395 and took it south back to the Stead end of that valley.

Looking at the GPS ground speeds while flying the various directions it was apparent that the stronger upper level winds were there they just hadn’t received the push to come down to the surface. Whenever I got on the eastern side of a mountain range/peak it got a bit bumpy. Never more than an occasional moderate bump but I wouldn’t have wanted to go any long distances in the conditions.

During the time I was flying there were about a half dozen other planes that came to or left from Stead. When I got back to the stead area valley I headed north again to let a couple of them enter the pattern then turned back south for my pattern entry. When I turned south and before I started the descent to pattern altitude I snapped another picture looking down the valley past Reno. You can see standing wave clouds starting to form down that way, too. 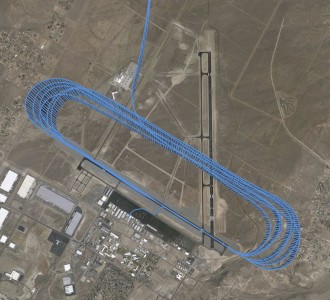 I had been flying for about a half hour when I got back into the pattern and wanted to log at least an hour so round and round I went.

My first couple of patterns were shared with a Maule. We managed to stay on opposite sides of the pattern, so spacing was never an issue. Then they landed and I was on my own. If you count the ground tracks you will see 7 trips around runway 26. I keep my patterns pretty tight since the glide ratio of the Swift is about the same as a crowbar.

I probably would have flown a few more circuits but there appeared to be rain showers coming over the ridge to the west. When it became obvious that they were continuing to move toward the airport I headed for the hangar. By the time I got the plane cleaned up and covered there was light rain falling.

We can really use the precip around here, so it would be fine with me if it poured (or snowed) for a few days.