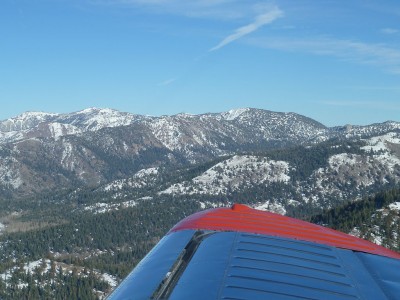 Yes, it has been a LOONG time since my last post. It has not been due to not flying, just a lot going on that took up the time I usually set aside for personal writing.

The last post was about a pancake breakfast back in August. My next major flight event after that was the West Coast Swift Fly-in at Amador County/Jackson, CA (KJAQ) in the end of September. It is traditionally held the weekend after the Reno Air Races.

The Swift event had a fairly light turnout this year. Only about 18 planes as I remember. On the plus side, that gave us more time to spend with the folks who did attend who we hadn’t seen for a year or so. It was a fun time.

I got home on the Sunday after the Swift event put the plane away and headed home to recover then a couple of days later I went back out to the hangar to clean up the plane and rearrange the hangar after the Air Race event. On the way home that afternoon an “impaired ” driver pulled out in front of me. I had no option other than a collision but managed to turn it into a glancing blow. It took out the right front of my truck then the impact spun the other vehicle so that it’s left rear took out my left rear side panel at the truck bed. There was no physical damage, just truck damage. That’s one benefit of driving a diesel F-350 that probably weighs about 8000 lbs. But that left me without regular wheels for just under 2 months. I had the use of my wife’s Excursion for meetings I had to attend but for the most part I stayed around the house. I had plenty to keep me busy and couldn’t see spending a couple of thousand on a rental car for the duration. In 47 years I have never needed that option on my insurance.  I appeared as a witness today for the other driver’s court appearance. The six-time DUI offender was sent to jail for 6 months. 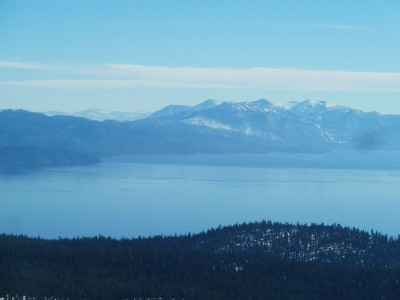 A view looking south across Lake Tahoe from around Kings Beach. A bit hazy but a nice view anyway.

A couple of weeks ago I managed to get two weekend days of flying in – a bit over an hour each day in the local area to get back into the air-sense mode and make sure that both the airplane and I were clear on the landing process. Since I had the oil nice and hot I also took the time to change over to the multi-weight AeroShell that I use in the winter, cleaned and checked the plugs and filled all the fuel tanks. Two days later the high temp was 30 degrees and the area stayed that way for about a week.

Last weekend I was able to get into the air for another local flight. I was crusing around west of the airport heading south – roughly from Beckwourth/Nervino (O02) toward Sierraville (O79) – when I looked at my GPS groundspeed. I was showing 112 kts at 8000′ MSL while my indicated airspeed was 132 kts.  Hmm. It got a bit bumpy as I got closer to Sierraville which is located just north of a mountain ridge. I turned around and headed in about the opposite direction (toward Beckwourth Pass if you’re looking at a chart) and watched my GPS groundspeed jump up to 175 kts.  The flight was generally pretty smooth but there was a definite wind shear going on above the tops of the mountains. That’s life in the mountains.

When I got back to Stead for some pattern work the AWOS was calling the winds as calm.  It was tailwheel day in the pattern – I joined a Taylorcraft and a Luscombe for a couple of patterns and then called it a day.

The following day the front hit and the Stead AWOS was indicating winds gusting to 40+ all day with ridgetop winds in the area registering just under 100 mph. We’re supposed to get another day like that later this week. Crosswind landing practice is good, but those conditions are a bit extreme.

If you are in for a bit of academic aviation training I came across a site called examo-o-grams that is a fun read/watch. They cover some of the more problematic questions from the various certification tests as well as some of the FAA Hot Topics. It’s a good review or as an aid to getting ready for that next written test.

We’re Finally Getting an Average Winter