One big advantage of being a Stead tenant during the races is that I can drive right to my hangar and avoid the crowded parking lots and long walk to one of the entrance gates. I normally park on one side of the hangar and open the other side so that people waking by can look in and see the planes inside. I have a polished Globe Swift that usually draws people to the hangar entrance for a closer look. and my wife has a Aeronca Champ project in the hangar with a For Sale sign attached. We have decided that we won’t be finishing the aircraft rebuild and will be selling the partially completed project in it’s current condition.

As race week progresses more people arrive at Stead to watch the action. There was a noticeable increase in traffic going by the hangar today. After an initial tour through the pit area I spent most of the day at the hangar answering Champ questions and talking about the Swift. I also had some airline friends stop by for a chat.

On Sunday my quick look into the Sport Plane pits found a Thunder Mustang with a race canopy instead of the usual P-51 style bubble and next to it a sleek red racer labeled as a GP-5.  I was working in the upstairs area of my hangar most of Sunday and Monday and didn’t see  much of what  happened out on the race course those days. Apparently there was a bit of excitement as described by this EAA article on the GP-5 Super Sport racer and this article with EAA coverage of Reno and the in-flight prop loss of Relentless.  It’s good to hear that, although two of the aircraft are out of the races this year, the pilots involved are all safe and sound (and have new sets of underwear).

When I checked the storage card from my camera I found way too many new photos for a single post. I’ll spread them out over 2-3 days.  Same process as yesterday… 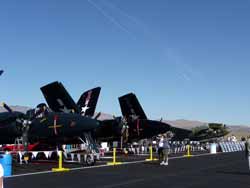 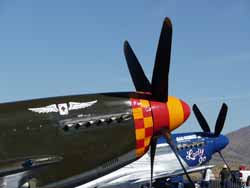 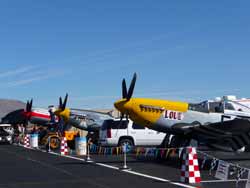 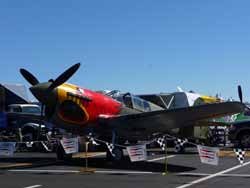 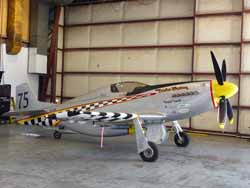 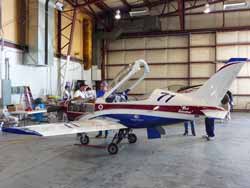 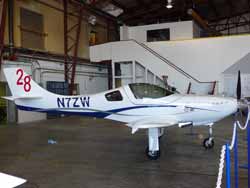 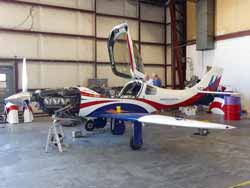 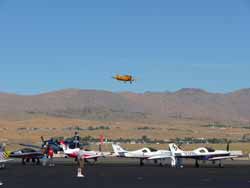