For those of us who are based at Reno-Stead the races are not just the five days published as the race days. The airport starts to transform into the race venue about a month prior to the event. It all begins with the set-up of the temporary bleachers – all the sections to the east of the main grandstands.

It will now take almost 3 weeks to return the airport to its normal operations. Today was departure day for the majority of the aircraft that were on the field during the races. By the time I left for home about 5:30 pm the ramp was virtually empty of aircraft. All through the day we had high performance takeoffs and low passes across the field. VIP tents, skyboxes and some pit areas are still in place, but are quickly being dismantled.  The taxiway in front of my hangar runs right into the area where the Hawker-Beechcraft display was located. All of their display is gone except for a 3′ pile of rocks right on the taxiway centerline. Apparently the ramp sweeper can’t pick up grapefruit- to basketball-sized rocks.

There are restrooms in a small building next to the aircraft wash rack for use by the airport tenants and the general public. One side has an unlocked door for the public and the other side has a door that is opened using a key card that the tenants can also use to open the airport access gates. Apparently some of the race spectators felt that they should be entitled to use that keycard side of the restroom building. They successfully disabled the door handle that accepts the card and have now prevented the door from operating at all. Airport maintenance will now have to find a way to drill out the handle and replace the hardware.  Thanks people, whoever you are.

I spent most of today at the hangar installing a JPI Fuel Flow/Totalizer in my plane. Over the span of race week I managed to get the transducer installed in the line between the throttle body and the fuel injection spider on top of the engine. Today was spent removing instruments in the instrument panel so that I could cut a new 2 1/4" hole and then rearrange some of the instruments. The only blank real estate on the panel is on the far right side of the panel at the top – way too far away to see clearly.

I have no idea how many times I got situated with my head under the panel and my feet out the window and then realized that whatever I needed to use next was sitting on the workbench or just out of reach in the cockpit.  It was slow progress but at least it was progress. I should have it done in a couple of days.  Maybe the ramp will be cleaned up by then and I’ll be able to safely taxi out to go flying.

On a sad note we got word tonight that friends of ours who brought the Staggerwing Beech that was in the Heritage Invitational area crashed in the vicinity of their home airport in Texas. It apparently was an engine failure not associated with a lack of fuel. The three occupants of the plane received some minor injuries and are fine, though understandable shaken. The aircraft was described as totaled.

Here are some photos I took today… 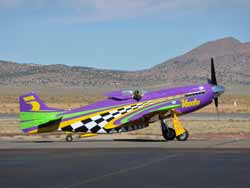 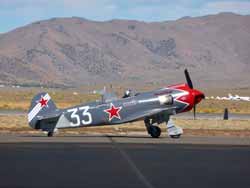 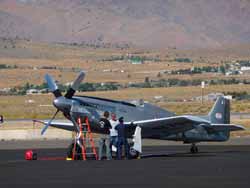 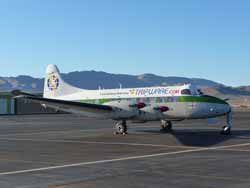 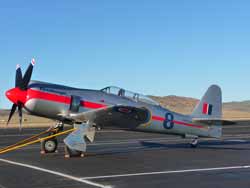