Day four was Saturday. More heat races and the Snowbirds show and  the super-loud F-18 demo. (Make sure that you bring earplugs when you attend the races.)  I got out of the hangar for a little while, but spent most of the time there talking with the people who stopped by.

After the racing had concluded on Saturday I helped out with a BBQ dinner that some of the RV builders on the airport have started hosting. Each year on Saturday night the Stead RV builders host a BBQ for anybody who has built or is building one of Van’s RV series of aircraft. Last night about 55 people showed up for the donations-only dinner. No, I have not built an RV of any kind. Since I brought one of the BBQ units, offered to cook and have a metal airplane they said they’d let me stick around and have dinner. Nice bunch of folks from all over the U.S. and Canada.

I was surprised at the amount of flying that was going the race schedule had been completed. A few planes went out on what appeared to be test flights but the majority of the flights had two people in the plane.  Right at sundown a four-ship formation came back and did an overhead pattern to landing – two F7f Tigercats and two P-38s. I was aimed the wrong direction to get a photo of the formation – sorry. I’m not sure if they managed an air-to-air photo shoot, but if they did the results will be in the magazines in a couple of months.

On Sunday the weather front had definitely moved into the Reno area. The winds in the morning were reasonable but continued to  strengthen throughout the day. By mid-afternoon the winds were gusting to about 35 knots and from a direction that produced a crosswind for both runways (14-32 and 08-26).

The Gold race for the Super Sport class was held just before the Gold unlimited finals. The Mike Dacey in the Questair Venture was well out in front with George Giboney in his Thunder Mustang trying to make a move when the Thunder Mustang engine failed. George was able to get the plane onto the runway but the wind gusts were too much for the powerless aircraft. A wing came up, the other wing hit the ground and the plane cartwheeled down the runway. It took a while but George was finally extricated from the plane and stood up and waved to the crowd. I heard a report that he was in a hospital with unspecified injuries. The channel 2 news in Reno (ktvn) had an amateur video of the whole thing but I haven’t been able to find a link to the video.

With the winds continuing to howl, the decision was made to delay the unlimited Gold race until 5 pm. At 5 pm the decision was made to cancel the race. The Reno Air Races are conducted using volunteer labor. A Monday race was considered, but manning of all the positions necessary to conduct the race would have been impossible. So, the Results of the Gold unlimited heat race run on Saturday determined the 2010 unlimited winners.  Strega took the trophy with Rare Bear in second and Miss America in third. Voodoo had been running a good race in second place put pulled up and off the course after 4 laps.

Here are the photos taken over days four and five. the last photo is of the Saturday evening line-up near the fuel pit. Five planes are in the photo. See if you can identify them before you hover the mouse over the shot and see the answer. 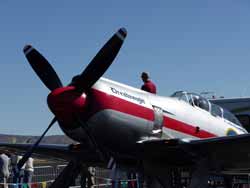 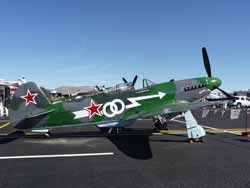 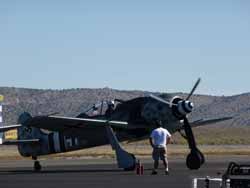 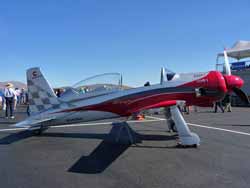 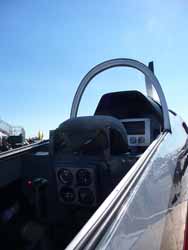 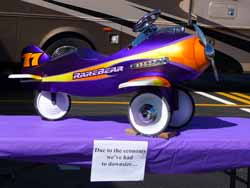 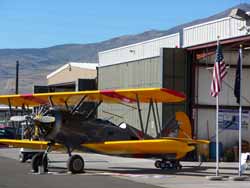 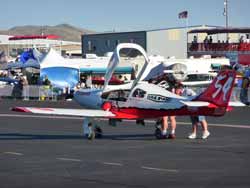 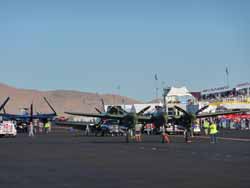 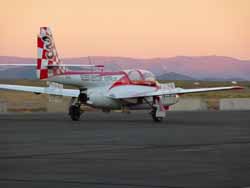 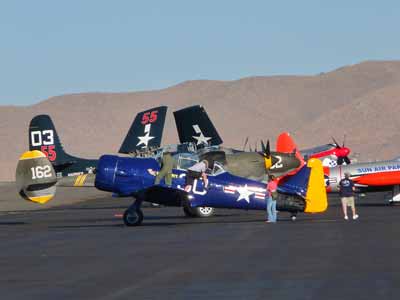