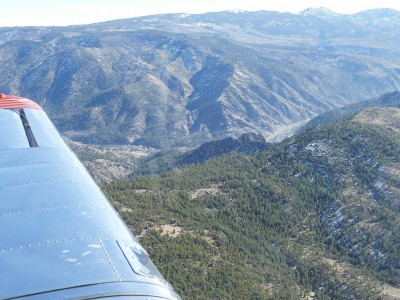 I-80 between Truckee, CA and Reno, NV

Sunday was a must-fly day. The winds were calm and the temperatures were in the mid-50s with high cirrus clouds moving through the area. Monday is supposed to be warmer but “pretty windy” with gusts to 50 MPH. It is now Monday at  7 am and the AWOS at KRTS says the wind is 270/14G20 – maybe they got the forecast right. Tuesday winter is being delivered. The rest of the week we’ll be lucky to see temps above 30 deg (F).

I got airborne around 11 am and headed toward Minden (KMEV) by taking a route around the west side of the Reno Class C.  That meant going around the west side of Peavine Peak (the 8266′ mountain SW of Stead). then I headed toward Boca Reservoir just NE of the Truckee airport (KTRK). On the way to Boca I flew by Verdi Peak (8444′) and could look down into the narrow valley where Interstate 80 travels north to reach Reno from Truckee. You can just make it out in the center-right of the photo. I flew down that valley once and the turbulence was so bad I was surprised the airplane stayed in one piece. Haven’t tried it since.

I crossed over the last ridge toward Lake Tahoe right around Kings Beach, just west of the 9240′ peak visible on the SFO Sectional right on the CA-NV state line. I followed the shore line clockwise around  Tahoe past Marlette Lake (just before the 9214′ peak on the north side of Spooner Summit Pass) and then turned east through the pass to started my descent for the Minden airport.  When I passed abeam Incline Village on the North Shore I passed an ultralight Trike going the opposite direction at about 9200′ MSL. I have ‘met’ them before while flying through Spooner Summit Pass.  That had to be a cold flight. 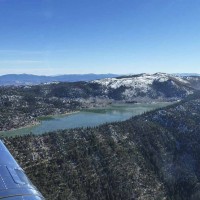 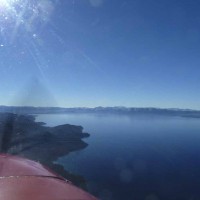 Looking South along the eastern shore of Lake Tahoe 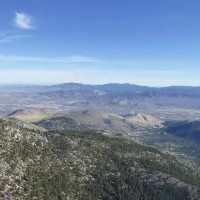 Looking toward Carson City while flying through Spooner Summit Pass

I filled up the tanks at Minden (25 cents a gallon less than at Stead), pushed the plane away from the pumps, chocked it and closed it up. Then I walked down the ramp to the Taildragger Cafe and had a nice lunch. There was one other airplane on the ramp that flew in after I got there.

I took the straight route back through the Reno Class C at 8000′ MSL and talked to NORCAL approach (the area above 6500′ is controlled from Sacramento while below 6500′ is controlled from Reno Tower (KRNO). Interestingly, both flights took 40 minutes because of the way that the traffic patterns are set up and the maneuvering required once near the airport.  I had a short vector for traffic as I neared Stead – a Regional Jet arriving from the SF Bay area was making a VFR descent to Rwy 16R at Reno and crossed my direct route just south of Stead.

After I pushed the plane back into the hanger I heard a jet engine being run at the west end of the ramp. It turned out to be a really nice looking Northrop F-5B. The two guys working on it – one inside the cockpit and the other outside and on a long intercom cord – looked a bit busy so I didn’t interrupt to see what was up. The registration says it belongs to a museum here at Stead but I haven’t heard anything about it.

All in all it was a really nice flying day. I logged almost 90 minutes and had a nice $200+ hamburger. What more can you ask?

The kids working on the project were all out of town taking part in mandatory Thanksgiving with the relatives activities. That left the project supervisor and I to get some work completed. We made good progress on returning some of the previous sub-standard work to airworthy status – in spite of occasional excess supervision [:-)] by other chapter members. The chapter has coffee and donuts three Saturdays a month at the chapter building (and Pancakes the other one), so there are always chapter members wandering through the project work area.

A Solution in Search of  Problem

There has been a lot of aviation press lately about the FAA’s new medical requirement for Sleep Apnea testing. Essentially, at every medical your AME will calculate your BMI (Body Mass Index). If your BMI is 40 or more and your neck circumference is 17″ or greater you will not be issued an FAA medical. You will be referred to a board-certified sleep specialist to be evaluated for Sleep Apnea. Anyone diagnosed with Sleep Apnea by that specialist will have to be treated before they will be issued a medical. Oh yeah, the testing is on your bill.  EAA estimates that testing will run at least $3500. The FAA has already said that this is just the start – they will continue to lower the BMI testing limit as the program progresses.

Why this sudden change in medical certification policy?  Well, because.

Is this going to make flying safer?  Of course it is. There will be fewer pilots flying and that will lower the accident rate.  I can remember several senior airline pilots who appeared to me to be over that BMI=40 limit. Maybe they have already retired by now or have miraculously gotten into good physical condition since I retired. Stranger things have happened and the airline pilot lifestyle has certainly changed from the golden age of flying days. Airline captains get a new FAA Class I medical every 6 months. It won’t take long to see if a trend develops.

Does a BMI over 40 indicate that you are in poor physical condition (obese)? Yes, it does. There is no doubt about that. Does it mean that you are automatically unsafe to fly? Safety records to not support that assumption. Was there any public discussion about instituting this new medical requirement? No NPRM was issued seeking public comment.

I know, you are in good physical condition and this new medical test doesn’t have anything to do with you renewing your medical certificate. Could it effect you in the future? Perhaps. What about the method that was used to institute this change?  What prevents the FAA Medical Certification Branch from deciding some other medical condition that has had no bearing on flight safety should be the tested, just in case – at your expense.

In case you are wondering, no I am not in the ‘requires further testing’ group. At least not yet anyway. Who knows how far they will lower the BMI limit next.

Want to calculate your BMI? – try this:  calculation of BMI

Still Flying After All These Years