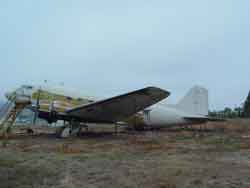 Back in 1933 Boeing rocked the airline world when it came out with the Model 247, a great looking twin-engine all-metal airliner capable of carrying 10 passengers at an outrageous speed of almost 190 mph. 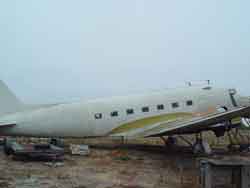 United Airlines grabbed 10 of them and became the only company in the U.S. with the modern airliner. The rest of the passenger-carrying fleet was made up of 3-engine Fords, huge biplanes such as the Curtiss T-32 Condor and single-engine versions such as the Vultee V1-A. Jack Frye, the head of TWA, tried to end United’s monopoly of the 247 and placed an order with Boeing. Boeing’s response was that the current output was already sold and none were available. This didn’t sit well, so Frye drew up an aircraft specification for a competing aircraft and sent it to all of Boeings competitors. Douglas met with Frye and presented their design, the Douglas DC-1 –  Douglas Commercial, Model 1. The design met or exceeded all of Frye’s specifications except one – it had two engines rather than three. But it had seats for 12 passengers in six rows with a center aisle bisecting each row, room for more passengers than the 247. The DC-1 passed all of it’s tests and in the process the Douglas engineers discovered that with some minor modifications the aircraft could be lengthened enough to add another row of seats. Thus,  the DC-2 was born and flew for the first time in May of 1934. TWA put The DC-2 into revenue service by the end of that year and several other airlines shortly followed their lead. KLM even entered one of their DC-2s in the prestigious 1934 England-to-Australia Air Race.  KLM flew their normal route structure as far as Indonesia, stopping at all their normal route structure stations while carrying four passengers and mail during the race. The DC-2 came in second in the race, landing just a few hours behind the race-designed DeHavilland DH-88 Comet, Grosvenor House.

The Condor was a huge biplane that could accommodate up to eighteen passengers in the daytime configuration and  12 in it’s night sleeper configuration. The idea was a good one, however the flight lengths on the intercontinental route were so short that sleep was almost impossible. After introducing the DC-2 into revenue service, American  decided to revisit the sleeper idea and discussed with Douglas the possibility of widening and lengthening the DC-2 to accommodate sleeping berths. The result was the Douglas DST or “Douglas Sleeper”.”

The Douglas DST made it’s first flight on December 17, 1935 and was put into service at American in June of 1936 as a daytime 21-passenger airliner flying between New York and Chicago. 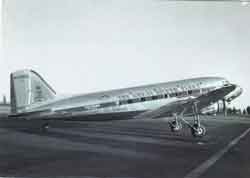 Then in September if that year it was introduced on the Newark to Los Angeles route in it’s sleeper configuration, making 3 stops on its overnight journey across the country. the upper windows seen in the larger photo were placed above the upper berths to help prevent the claustrophobic feelings that might occur due to the curvature of the upper fuselage.

At first the DST provided a great addition to the quality of service over that available with the DC-2, however it was eventually overshadowed by it’s sister ship, the DC-3. Only 21 Douglas DST aircraft were manufactured. It is generally assumed that those examples that might still remain have all been modified similar to the one I saw and have been registered as DC-3 models.

Now that I have a greater appreciation for it’s place in aviation history, the next time that I am at the Schellville Airport I will take a closer look and take some better photos.