Not Flying Much Lately 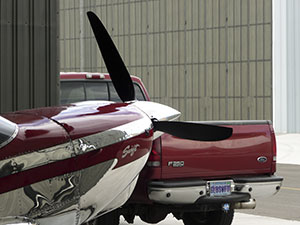 It’s been about a month since my last flying report – the trip to Bridgeport for lunch. A week ago I made a really short trip to Carson City and back. Twenty-five minutes each way, engine start to stop. I wanted to change the oil in the Swift to a multi-weight (Aeroshell 15W50) for the winter flying season and needed to heat up the oil to make it easier to drain. Also, the price of 100LL in Carson was 75 cents a gallon lower than at Stead. It turns out that in order to break even, considering the amount of gas I burned on the round trip,  I would have had to buy 42 gallons but I only needed 29 to top off the tanks.  That means I would have saved money by filling up at Stead at the higher price per gallon. Nevertheless,  it was a good excuse to go flying… as if you actually need one…

When I got back to the hangar I changed the oil and got almost everything put back together before the temperature started to drop nearing sunset. I came back the next afternoon and finished up the process – cut open the filter to make sure there was nothing unusual in there, got safety wire back where it was needed, re-installed the cowling, cleaned all the bugs off from the flight and covered up the plane with the dust covers. Then I gathered up all the liquids in the hangar that shouldn’t freeze and put them in the truck to take home. Night time temperatures are getting just below freezing now and should get near the ‘hard freeze’ point by the end of the month. Nuvite, the aluminum polish that I use, specifically states to not let it freeze. As much as I use and as expensive as it is, I play by their rules.

To prepare for the Flight Review this time I bought the Sporty’s Flight Review App for my iPad.  So far it’s OK – nothing that I didn’t already know/remember. That’s the point, though, isn’t it – a review of things that you already know and use. If you are finding new information in the ‘review’ then you have been flying without all the proper tools. When I finish with the app I’ll go on and try the FAA Flight Review Prep Course on the FAA Safety website. I took it last time and thought it was pretty good. Then I’ll schedule the Flight Review with an instructor.

Last time I used an instructor from my home airport. This time I think I’ll try one from one of the local EAA chapters. And I am considering doing it in his airplane rather than mine. It will give me a chance to fly something different (PA-28-180) and the instructor will be more likely concentrate more on my performance than the airplane’s. When I get a younger instructor to administer the review in my plane they occasionally are more interested in getting to fly the Swift than they are in doing the review. I’d probably be the same way if someone wanted me to administer a Flight Review in something like a Meridian. But that rarely happens for anyone because the insurance companies require formal recurrent training in that type of plane and graduating from that training would qualify as a Flight Review. That’s very similar to why you rarely see an active airline pilot getting a Flight Review – the Part 121 recurrent training fills the requirement.

Nor do you see military pilots getting Flight Reviews. At least one of the military annual checkrides could qualify as a Flight Review. Also, just because an individual is a military pilot does not mean that they have a pilot’s license. When you graduate from Undergraduate Pilot Training in one of the military services you are awarded the wings of the associated military service – Air Force wings, Naval Aviation wings, etc. , you are not awarded an FAA pilot certificate. You must earn that on your own. The FAA recognizes the quality of training that you have received and will award an appropriate FAA pilot certificate if you pass a written exam on the civilian flying regulations, but you must take the initiative to study for, schedule and pass the exam. I’m not sure why you wouldn’t make the effort, especially in today’s economy and with the projections for military budget and force reductions, but I’m sure there are some military pilots operating out there without FAA certificates.

Currency and the Professional Pilot