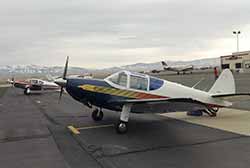 Yes, I’m still around and still flying. I did finally finish the Annual Inspection of the Swift at the beginning of this month and have flown in a couple of times since then. Once to renew my landing currency (it had been 95 days since my last flight) and the other to have lunch with a couple of friends in Minden, NV. It was sort of a mini-fly-in. there were 4 Swifts on the field – the two parked in the middle are painted in a new stealth camouflage paint.  Actually, they were in hangars, though one of the owners joined us for lunch.

It seemed to take forever to complete the annual inspection – I set a limit to only go out to the hangar and work when the temperature was supposed to hit 50 degrees (F). This year we had some really cold weather – though not a whole lot of snow to go with it. There is still a little around in the deep shadow areas, but not much. The mountains got a bunch early, but haven’t had much since early in the skiing season.  One more lesson on not having the annual due during a winter month if you have an unheated hangar.

On the way back from Minden I flew by Pyramid Lake and noticed that the water level is up quite a bit from last summer, which is really nice to see. I noticed an article in the local newspaper (online) that the Lohontan Cutthroat Trout population is starting to come back in the lake – several trout size records have been set at Pyramid.

The Swift in the front of the photo is based in Carson City, NV though it’s owner lives in Hawaii. The plane was at Minden to have an avionics fan installed behind the instrument panel. This plane was the Grand Champion trophy winner at the West Coast Swift Fly-in last September. Beautiful plane – and for those techies out there, it is fitted with a Glass Panel – if you look closely at the large photo you will see all the antennas on the top of the fuselage.

It was a nice flight – obviously overcast, but clear and smooth under the high clouds. Great to get back into the air and out of the traffic pattern.  I will be up again later this week with a friend from Stead. He wants to get some hands-on experience with his iPad Mini, ForeFlight and his dual GPS for the iPad.  I’ll fly and he’ll tap away on the various screens – much safer than trying to do both and accomplishing neither very well.

Today is cold and windy – currently there is a wind chill of 28F and winds 310/24G32Kts at Reno-Stead. Tomorrow is supposed to be more of the same but by the end of the week they say it will be in the mid-60s. Meanwhile, the mid-west is digging out of a huge snow storm – go figure.  Wonder if the groundhog got buried under a snow drift…

I have the same alerts for aviation articles that I have always had – used to find the articles that I have been passing along to you for a couple of years. Google’s latest algorithm changes must have caused  a major change in the way their alerts produce results. I haven’t found anything at all worth passing along in a couple of months. Most of the interesting articles that I come across are in either the AOPA or AvWeb email newsletters – which you are probably already receiving (or should have subscriptions). Maybe the article traffic will pick up as the flying season gets started. We’ll have to wait and see.