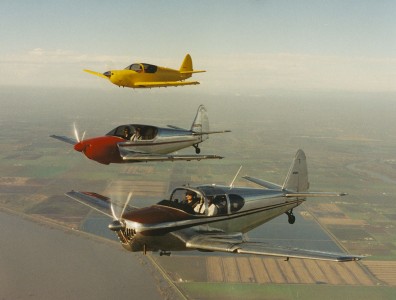 No relation to the article, just a photo that was on my computer. The plane in the foreground was my previous Swift. I am flying it in the number two position of the 4-ship formation – the photo having been taken from the lead aircraft.

Last week I made the half hour drive north to Stead so I could pull the plane out and fly a half hour south for a hamburger at the Carson City Airport (KCXP). EAA Chapter 403 in Carson has a BBQ every Thursday at 11:30. They cook hamburgers and hot dogs for anyone who wants to attend. The proceeds from the weekly events go toward the Chapter’s Young Eagle Program.

I’m not sure if it’s an advertising problem or what but there are rarely any aircraft that fly in for the event. Most or the participants are EAA Chapter members or airport/area workers who are interested in an inexpensive lunch meal at the airport.

So, last week I thought I’d be different and actually arrive by air. It was a beautiful day for flying but I was a little late so I flew straight there through the Reno Class C airspace. It was a half-hour flight (engine start to engine stop). I had a nice meal and talked to several Chapter members, then helped clean up before heading back to Stead.

I had other errands to accomplish so I again took the straight route through Reno’s airspace. This time NORCAL Approach said that my transponder “wasn’t working right.” Not too specific or helpful for troubleshooting. They asked if I was at such-and-such a location, which I was, and then asked for my altitude – level at 7000′ MSL.

Then they asked me to recycle the transponder and confirm the squawk code and settings. I turned all the dials and pushed all the buttons as they asked but didn’t have any unusual cockpit indications. The blinking light on the transponder still indicated that it was responding to their interrogations.

They confirmed my position and altitude again and gave me no indication that I should be doing anything other than proceeding on course to Stead. They weren’t any more forthcoming with troubleshooting information, so I asked a few more questions. I finally got out of them that what they were seeing my assigned squawk code but were not seeing my altitude readout.

The next day I had the local avionics shop bring their test equipment to the hangar and see what was being output by the transponder. Yep, solid signal with the squawk code, but just an error light for the altitude. The avionics shop happened to have a used encoder of the same type so they temporarily plugged it in instead of the one I had installed. After a warm-up period the transponder mode c was putting out the correct altitude. Troubleshooting complete.

Now it was decision-making time. Option One: buy a new encoder ($235 + tax/shipping); Option Two: Buy the used unit that the avionics shop had on hand – unknown condition, unknown cost (parts manager was not available); Option Three: Ship my defective unit back to the manufacturer who said that the bill would be $100 or less and that they would turn it around in 1-2 days. (They are located in San Jose, CA).

I shipped the unit back to the manufacturer yesterday by Priority Mail. They’ll call when they get into it. The waiting begins…

When I get it back and re-installed in the plane I’ll have the avionics shop come out again and do another VFR transponder/encoder check. The checks are due every 2 years – or whenever the static system is opened up or equipment is changed.

Oh the joys of aircraft ownership.  It could have been much more costly. If the transponder had died I would have had to opt for an upgrade unit looking forward to when ADS-B will be required. That would have been a Gazillion-Dollar Hamburger.