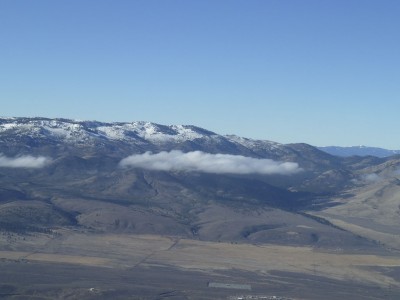 I looked at the weather the day before Christmas and decided that if I was going to get to fly again before the end of the year I had to do it that day. The weather was supposed to turn really cold with the possibility of significant snowfall. (They were right on both counts.)

So, I called my friend in Gardnerville, NV and arranged to meet for a late breakfast at the Taildragger Restaurant on the Minden Airport (KMEV).

The winds were light but favoring runway 26 at Stead, evidenced by the three other planes in the pattern – their pilots apparently having come to the same conclusion about going flying.

There were a few clouds that had formed in the early morning as the sun warmed the ground but most were dissipating rather quickly. This photo is looking at one of the mountain ridges to the west of the Reno-Stead Airport.

I decided to take the ‘lake route’ to Minden – the west side of the mountain ridge toward Truckee, then around the east shore of Tahoe, past Incline Village to the first pass back into the Washoe Valley ((Spooner Summit Pass) followed by a descent into Minden. 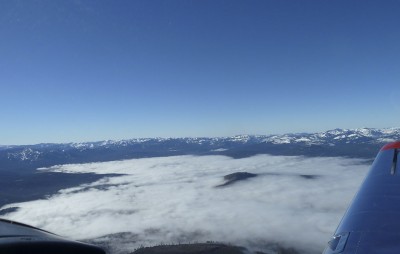 This time of year it is not unusual for the valley around Truckee, CA to be covered with what the AWOS calls freezing fog, often with a 200′ ceiling and 1/4 sm visibility. It usually burns off by 10 am but this particular day it was pretty persistent. There are two large reservoirs/lakes and a third smaller one in the valley that provide all the moisture for the clouds. If you are driving through the area it is a nice sensation going westward on I-80 up the mountain toward Donner Pass when you break through the top of the cloud deck into the sunshine. Almost like taking off on an overcast day and climbing through the overcast to clear skies above – but not quite… 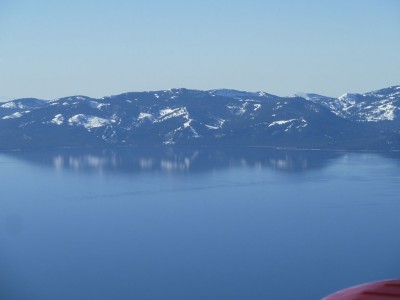 Lake Tahoe on a calm day.

It was a beautiful day for flying with calm winds and almost zero turbulence – it’s hard to get a day like that around all these mountains. I meandered my way up to about 10,500′ and headed over toward Lake Tahoe and Minden.

Tahoe had the glass-smooth surface that you see in all the promotional brochures for the area. I couldn’t help but take my own photo just to prove those types of images aren’t Photoshopped – well, not too much anyway.  When the wind is as calm as it was that day or with just a very light mixing breeze there can be a significant temperature inversion in the area. The cold air sinks to the bottom of the valley or lake surface and the temperatures aloft are actually greater than at the surface. That can set up a wicked inversion layer that traps the smoke from all the wood-burning fireplaces around the area.

After our lunch meeting I topped off the fuel tanks and then headed directly back to Stead where I topped off again. I thought I’d get the tanks filled to the top to avoid any water condensation problems when the temperatures turned cold. Traditionally the fuel is cheaper in Minden than Stead so I bought the majority of the fuel there. Turns out that I should have checked the pump prices first – Stead was about fifty-cents a gallon cheaper. Oh well.

Speaking of fuel prices – they are still going down – so it’s time to go out flying again. Over the holidays the morning temperatures were in single digits with highs right around freezing. This week we are experiencing highs in the mid to upper 50’s. I have a light work day today – so I’m going to go play for a while…